Share All sharing options for: The Downbeat #1119 -- The "Better late or never" Edition

What's the easiest shot in basketball? The open court dunk?

I think the easiest shot is the free throw. Old guys who are in their 70s can hit it. And 8 year old girls can hit it. Even Kyrylo Fesenko hit 55 over his career. It's an easy shot, I've made a few myself. Of course, I did not have to do it with 20,000 people watching me.

For his career, Gordon Hayward shoots 81.1 ft%. At home this dips down to 79.3%, but on the road his concentration dials up and he's knocking down 82.8 ft%. That may not seem like a big enough difference, but Hayward is a bigtime / big game player. Let's look at some of the other guys currently on the Jazz roster.

Well, it may not mean anything first of all. If we speculate, it could mean that Hayward, who is more confident regardless of the outcome of his last FT shot, cares less about the crowd and his performance difference at home vs. the road isn't statistically significant; WHILE, Favors isn't able to get to that concentration state when people are actively rooting against his performance.

Let's look at some more players on the team.

Alec Burks is a slashing shooting guard who draws contact and goes to the line. He also shoots 72.1 ft% overall. At home Mr. Coolin' / Chillin' shoots at a cool and/or chilled 70.7 ft%. (We chased Jeff Hornacek away why, again??) On the road he's actually better, at 73.3 ft%. Maybe Burks play isn't affected by performance cues as much as we think; but his performance isn't really affected by the crowd either? He's better on the road so he can shut things out. But it's still a less than 5% difference either way.

Is there anyone who absolutely goes haywire at the line? Yes.

Brandon Rush is a "shooting" shooting guard. But for his career he has only shot 72.0 ft%. (Maybe I need to give Alec an apology here) At home Rush doesn't rush, and makes 74.9% of his shots. Three in four. That's not great for a guard, but for a forward I could live with it. ON the road though? He shoots 68.7 ft% on the road -- and that's over his entire career, and 148 road games.

We are in the dog-days of the summer now -- and I would like to announce that we're going to bring back the NCAA bracket style pool of voting in which media personality is the King of Utah Jazz news! In the comments please nominate people to put in the bracket (Their name, and their current gig) This is a fun way to see who fans like and trust! Also, a great opportunity to network with these guys. This year I am hoping to get a little more participation from these awesome sports personalities and get to know them all a little bit more.

Because, honestly, we really want to see that @DJJazzyJody/@TribJazz cage match, right guys?

So put your nominations in asap so we can get this started and crown the King of Jazz media 2013!

Three teams seem to use P3 the most -- they have been the Utah Jazz, Brooklyn Nets, and Golden State Warriors. Right now the Jazz have a TON of guys there. Derrick Favors, Alec Burks, and Enes Kanter (right off of medical clearance) where all there already once this off-season. Brandon Rush and Ian Clark are there now. I expect Andris Biedrins to be there soon too, because he goes every off-season.

And now Trey Burke is going to be there too! 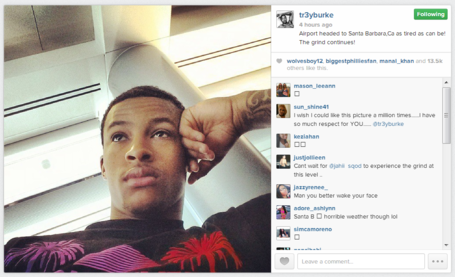 So, can we expect some informal Jazz practices? It seems like the only people taking this off-season off has been Tyrone Corbin and Sidney Lowe. (It wouldn't surprise me if Dennis Lindsey had Marc Iavaroni in his contacts list, btw, but you didn't read that first here . . . )

This year Ian Clark, I presume, will get the #21. He'll be the first guy to wear it for the Jazz since David Benoit. This isn't big news, except that's the number I'd use in NBA 2K create a player mode with the hope of joining the team. Back in my NBA Live days I just added myself, but back then I used #13 (but since Mehmet Okur I don't think I deserve that number). The #21 is the cursed Jazz number as we should have HAD it for Dominique Wilkins -- but we traded him for something you could argue we needed more than a high flier. (He was our original #3 pick)

. . . but I do expect him to at least get a better shot at showing his stuff than Kevin Murphy did (who was traded in that three teamer, and quickly cut from the Warriors).

If you had to hazard a guess -- how many games do you think Clark gets into this year? Do you think the Jazz will try to shoe-horn him into the PG role? I think the Jazz will, at the very least, try to do that at times in training camp. But as far as the season goes, barring injuries to our guard spots, I think Clark will watching a lot from the bench this year. C.J. Miles played few minutes and in few games -- yes he was a teen when he joined the team -- but I think his main problem was being so low on the depth chart. Miles played 120 games in his first three seasons in the NBA (23, then 37, then 60). The main reason for this was because at the wings we had everyone from Gordan Giricek, Andrei Kirilenko, Matt Harpring, Derek Fisher, Ronnie Brewer, Kyle Korver, and Wesley Matthews up there ahead of him.

I guess if we want to really remember he's on the team he has to work really hard every day, show up early, and when his number is called -- absolutely kill it and force Tyrone Corbin's hand. (you know, because we hold onto the fantasy that game performance has an affect upon minutes distribution -- instead of the reality that it's more influenced by talking to your agent during contract years.)

So work your butt off Ian -- or work on your dunks. That's what Benoit did, and we still remember him after all his playoff open three bricks . . .

I don't really have anything here. To be clear it's not my standard practice to write downbeats on a) day's when it's not my day, and b) at 10 pm on the day they are supposed to be up. So I asked twitter to reply to me: 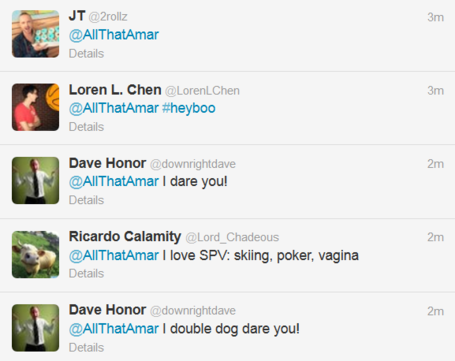 It's up to YOU guys to devise a Utah Jazz related story surrounding these tweets. Maybe it's a conversation between two players, or something that happens during a game or something. Go nuts!

As an aside, the people who follow me all seem to have one thing on their minds right now -- and that's wrecking this downbeat.