Share All sharing options for: The Downbeat #1121 -- The "Odds and Ends" Edition

The Utah Jazz have been very busy this off-season. They added a bunch of new players. Brought back Jerry Sloan and Karl Malone as coaches or advisers. They promoted Brad Jones to fill Jeff Hornacek's spot. And they haven't stopped there. I think I failed to mention that they've added Alex Jensen, the NBA Developmental League coach of the year, to be part of their developmental staff. They haven't stopped yet though, and the Jazz have recently promoted David Fredman to director of pro player personnel (scouting), promoted Richard Smith to exec director of basketball operations, hired Bart Taylor as a coordinator of scouting, and topped that all off with making Isaiah Wright an assistant strength and conditioning coach.

Fredman has been with the team for 35 years! (Give or take) There's a lot of cool info about these four guys at the Utah Jazz website here.

Of course, the ever astute Jody had this to tweet:

Bear is the only Utah Jazz employee that didn't get promoted this offseason. He remains executive vice president of mascot operations.

And our very own Jazz Santa had this rebuttal: 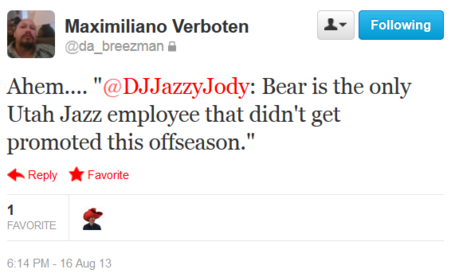 Man, I love our team and all the awesome people I get to interact with who love our team too! This is so much fun, even in the middle of August!

I'm pretty sure no one cares about this except me, but a few weeks ago I predicted that Brandon Rush would go with the #25 this season. If this picture of his Utah Jazz colored shoes is any indication -- I guessed correctly. 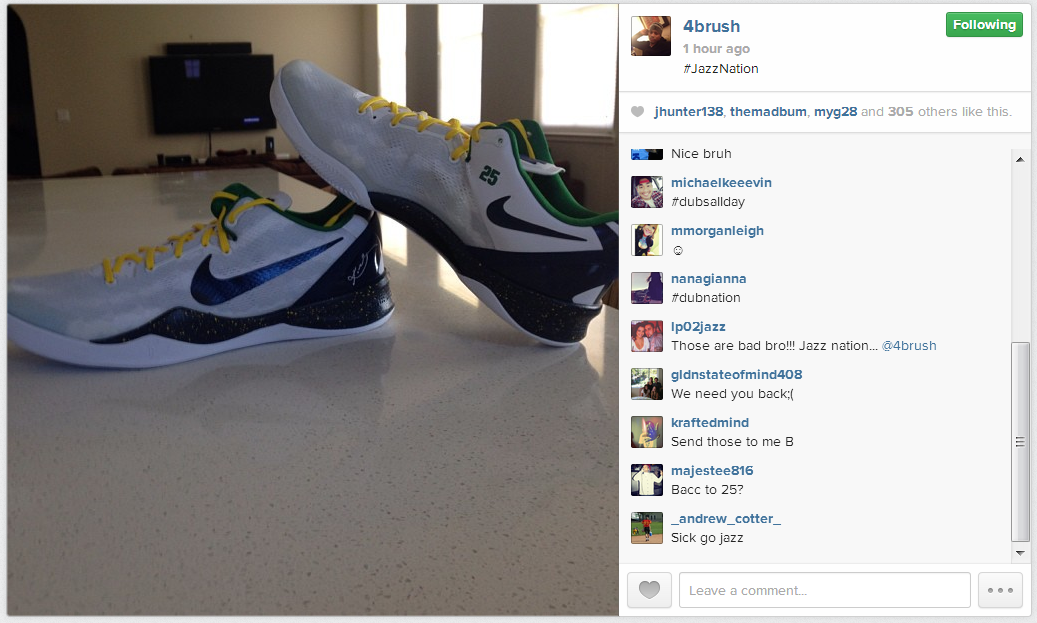 I'm going to level with you all here -- the more I factor in who we have on this team, injury history, and our over-all goals for this season -- trading up to snag Rudy Gobert from France is a very aggressive and impressive move. Really big, skinny guys have come into this league before and failed. Shawn Bradley, Keith Closs, even for a few seasons Tyson Chandler looked like a lost cause. But sometimes a guy is able to make it, and when a really long guy does he can be a game changer.

I've only seen Rudy play for France internationally two or three times, and in the summer league down in Orlando. I don't have any comparison video of him going up against NBA level competition. But I think I am really focusing my attention here. Moving up to draft Trey Burke is an A or A+ off-season for a team that needs a point guard. I think what Gobert can be will, if he pans out, put us way over the edge.

He's not quite at that Kyrylo Fesenko level of interview insanity, but I'll take it.

I think he needs to live at P3 and in Karl Malone's house for a bit -- or at the very least be forced to eat everything Enes Kanter eats. These tall skyscrapers get pushed around a lot if they don't have a strong base. I have identified that it's his lower body that's the problem (slow movement, not a strong jump, etc). I am sure he will work on it.

In the mean time, yeah, I think Gobert is more captivating right now. I have no worry about Trey Burke as a pick. And I'm not worried about Raul Neto either.

Rudy has a chance to be a bust based upon his draft position and skill set -- but he also has a chance to really make a difference on a team where we will be constantly monitoring Derrick Favors' plantar fasciitis and Enes Kanter in his first year after a serious injury.

Had my first Bball practice with the Jazz today since l got hurt,new teammates looks good, shoulder feeling good, Grateful for ALLAH's Grace

When I talked with the guys at P3 they said he was ahead of schedule. I now believe it.

So far this off-season, at least two guys from the 2010 NBA Draft class have gotten paid: John Wall and Larry Sanders. They probably both were offered more than they are worth on the open market -- but their teams decided to show them the money right now. I'm not a money guy. The only thing I really know is that I don't have enough of it. (I'm really in no situation to judge if someone else got too much or too little.) Thankfully, there's a guy here at the Dunk who is all over that stuff, and that's Peter J Novak. You should follow him if you don't at @Peter_J_Novak on the twitters! Why should you? Because he tweets gold and explains financial stuff in simple terms so brain damaged people like me can understand.

We need to understand this stuff because right now Gordon Hayward and Derrick Favors are eligible for contract extensions right now (we need to act on this before October 31st). And then the next season will have to go over this again with Enes Kanter and Alec Burks. And then in two seasons after that, go through this all over again with Trey Burke and Rudy Gobert. (Yeep, six first round picks can add up if they are good. We may actually get two MORE in 2014!)

Ideally I'd screen cap his entire timeline. Read it for yourself here, or just read some of the excerpts I pull out:

@Clarkpojo right...which is my point, riskier for Jazz to extend now AND riskier for Favors to give up $ potential = No deal

One last point on a Derrick Favors extension, his qualifying offer for 2014-15 is $8M...not much incentive for him to sign a $10M/year deal.

Great info and analysis! (And cameos from some other awesome must-follows) And like I said earlier, I'm not a money guy. I would drive a dump truck full of money to his house right now and say "$12 million per season -- sign on the dotted line, and we will make sure one of these visits your house every month. Forever."

I think Yucca has a similar pov (not a stretch to imagine the two of us agreeing on a lot). I'd try to sign Favors for $12 million per, and Gordon Hayward for $11 million per right now. They (in my mind) will have seasons that make them both worth much more going forward.

In my formative Jazz-loving years Karl Malone had a flat top, was all swole, and dunked it on 7 footers so hard, their momma's felt it. My schema does not account for the passage of time very well when it comes to The Mailman. According to Instagram, we now have to contend with a very content, Older looking Mailman . . . and I just don't know what to think or feel. 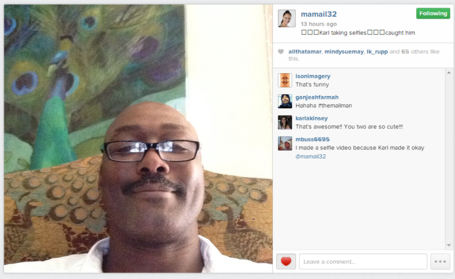 For the record, I believe those are his wife's glasses ... but still ...

Well, in my mind (and heart) Karl is still the young terror who dominated all opponents. In celebration of this, here are some of his 40+ point scoring games . . . from the age of 25 and lower

This is The Mailman I grew up watching, and this is how I choose to remember him.