Share All sharing options for: The Downbeat #1126 - The "What surgery" Edition?

We're really running out of things to talk about right now, I guess. Utah Jazz center Rudy Gobert released a post-op picture of himself today. He is a little drowsy after surgery. 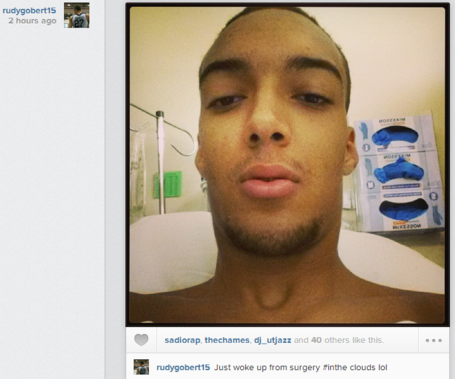 What surgery? Well, we knew he had to get an ingrown toenail taken care of. They aren't usually big-time things though. And I thought he was getting his surgery for his toe performed in France. But if he's drowsy? That means he went under general anesthetic instead of just local. Sorry for going all George Clooney on you guys, but this does not sound like normal procedure. If you wanted to learn more about this you can read up on it here. (NSFW -- lots of words, I could have just linked to a youtube of the operation itself, but that would be gross for some people)

Oh wait, maybe he's just drowsy because of the pain killers he's on AFTER surgery? Crap. Okay. Carry on.

For the record, we are afraid of bigmen who come into the league with a injury history of the feet. (Curtis Borchardt, Greg Oden, Yao Ming, etc) However, an ingrown toenail may tend towards a chronic injury, however, once it is gone then it's not going to be a problem again. So, keep healing Rudy -- and in a few weeks you'll be in P3 for some serious work.

The Utah Jazz are going to get SportVU next year.

Sources: The NBA has reached a deal for all 30 teams to have data-tracking SportVU cameras installed in their arenas: http://t.co/NuqwhplqOz

Guys! We get SportVu next year! How exciting. I'm excited.

See, Andy is excited! Why is this exciting?

It's exciting because SportVU is AWESOME!

Okay, we've gone from anatomy to stats. Let's even out this downbeat from the cerebral level a bit. Here's C.J. Miles ' latest track. It's also NSFW, but talks about some social issues. So in a way it's still pretty highbrow.

Jazz fans -- 47 days until our first pre-season game. Let's keep it together, we're almost there : )

Are you a college student? Are you a Jazz fan? The Jazz have something you may be interested in!

Hey Students! The Utah Jazz have an opening for a Writing Internship for this coming season. Details: http://t.co/DlplpBQk5j

It's also a paid internship. If I was a student I'd try out.