The Downbeat #1127 -- The "This was supposed to be posted on Saturday!" Edition

Sorry everyone, I've been having a *LOT* of computer trouble lately

Share All sharing options for: The Downbeat #1127 -- The "This was supposed to be posted on Saturday!" Edition

Sorry this is so late -- but you readers deserve content. So here is "Saturday's" downbeat. (Man, back in my day we didn't even HAVE Saturday Downbeats) . . . the first beat, is of course . . .

I like T-Shirts. We're going to make SLC Dunk T-shirts this year that you all can / will buy. Of course, SB Nation legal has to approve everything and we don't have the rights to use certain images of teams, the NBA logo, or players themselves. Of course, other people do that stuff so we don't have to.

You want this T-Shirt. 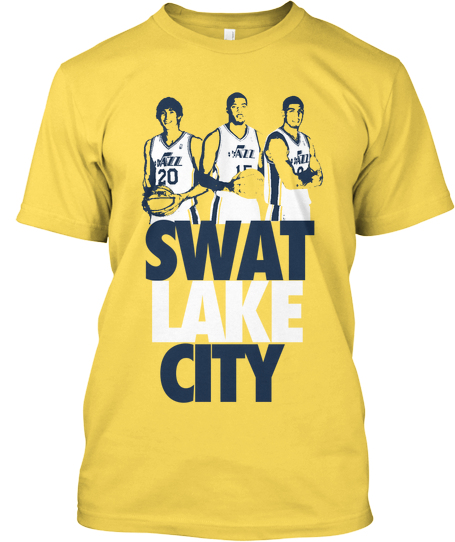 Buy it! Buy it from here. I don't know who makes these shirts, and we're not getting any scratch from them -- but it's a good shirt for sure.

It was Shandonfan's Birthday (@ShandonFan) this weekend, and this post was going to be somewhat dedicated to her . . . by putting out there a vid of Shandon Anderson, and I'm sure she's seen it so many times before.

So here's the deal -- not every player can be a star, you need players to fit different roles. But over all if you are efficient you can help your team. I think it's fair to say that Shandon did a lot for our team during our NBA Finals runs. We didn't get over the hump, and he got a few rookie calls against him . . . but we still love him. Btw, the 1997 Finals were on NBA TV over the weekend too. But I didn't get a chance to watch any of it.

David Locke did, and had this to say:

Interesting. I'm not sure any legit media guys theorized that Al would be better off the bench, and I'm not sure Al every really thought about taking less money to go to a good team and be a smaller part of the offense. Anyway, more important was this tweet:

I agree. If Karl Malone can help Derrick Favors, Enes Kanter, and Rudy Gobert set really good screens they could free up our ball handlers for good shots.

Also interesting, but even more important is that tomorrow (Monday) is DownrightDave's birthday (@DownRightDave) ! Happy Birthday for Jazz fans everywhere if I missed you too! Also, if you want to be on some Jazz fan birthday list, write yours in the comments section and I'll give you guys shout outs at the right time of the year.

The VMA's (Video Music Awards?) are happening right now. I don't know much about current pop music, but I did follow a bit of it on twitter. It seems like our very own Deron Williams was a part of it. I guess being a big player in a big market is working out for him.

NBA.com's Frank Blinebury wrote something pretty sweet about our very own Utah Jazz, rebuilding, youth, Gordon Hayward and Derrick Favors. You all should read it now.

If you need convincing, here's an excerpt:

In the glory days it was Karl Malone and John Stockton. More recently it's been Al Jefferson and Paul Millsap, with a dose of Deron Williams.

Now it's all about Derrick Favors and Gordon Hayward pulling the wagon as the Jazz move into a new era.

"It's going to be a challenge for sure," Hayward said at the Team USA minicamp in Las Vegas. "We're going to have to learn from our mistakes and not make them again and again.

Your browser does not support iframes.

"Knowing that we're going to be taking on a much bigger role puts another smile on my face and I'm proud that [Favors] is here next to me. I think we've both come a long way."

It's been three seasons of fits and starts, trial and error and plenty of patience that have brought them here as the two main cogs in Utah's so-called "Core Four" that includes Enes Kanter and Alec Burks. Now they've added national college player of the year point guard Trey Burke to the mix. While the expectation is that the upcoming season will be a bumpy road with a young lineup, there is a reason to endure it.

I missed watching really good basketball so I stumbled upon the 1992 NBA Dream team playing in the Olympics -- because so many years have gone by now you can just find the entire games online.

Most people remember the USA / Angola game as the Charles Barkley game because he elbowed a malnourished guy from a 3rd world country. But watching it again -- Malone was beasting early. He scored the first point for the team, and still managed 19 points while playing with the starters: Magic Johnson, Michael Jordan, Larry Bird, the Mailman, and Patrick Ewing. Barkley only scored so much because the starters killed Angola and stayed on the bench for more than half the game. Anyway, fun to watch . . .

As an aside, the *best* play I've ever seen in my life is the Magic drive and dish off the break, behind his head, no look, to Larry Bird as the trailer for a swished three. Man, it was so easy to fall in love with this game watching these guys.