Share All sharing options for: The Downbeat #1109 - The "Jazz Babies" Edition

The first order of business . . . are Jazz babies. Babies who are born into families where they have no choice BUT to endure the highs and lows of following the team we love: the Utah Jazz.

Jazz fan Grayson Moulton ( @CaptainGForce47 )was nice enough to snap this pic and tweet us a pic of his daughter!

And yesterday our very own Spencer Campbell ( @UtahJazzPodcast) welcomed into the world his newest addition to the family, his first daughter, Isla Mae Campbell!

JAZZ BABIES! Our team may not get bandwagon fans, but our fans make more fans at a very high rate!

From one end of the age spectrum (newborns) to the other . . . Greg Oden has signed with the Miami Heat. Yesterday I asked if we should be interested in him, and 31% of the people who voted said "NO". Well, the Heat said YES, and signed him to a one year deal for $1.03 million, with a player option for the next year at the rate of $1.14m. There are a few reasons why this happened . . . the first being that the Heat currently have Chris Bosh, Udonis Haslem, and Joel Anthony on their roster as non- LeBron James bigs. That's three guys, and none of them are really big inside. Chris Andersen has agreed to re-sign with the Heat too, but he's not as reliable but is a defensive force.

Miami is in a "win now" mode and Greg wouldn't need to be good where he is going. But if he could play 10-15 minutes a night and get rebounds and get out of the way he will be useful there.

In Utah? He wouldn't need to be good here either, but I think that he would have a harder time trying to find time on the court when trying to fight against Derrick Favors, Enes Kanter, Rudy Gobert, Andris Biedrins, and when he gets back to full-health, Marvin Williams as a face-up four. It would be hard to mix him in for a 'comeback tour' when we're trying to develop three guys under the age of 22, and manage the needs of two veterans in contract years.

I wish Greg Oden all the best. He's had a really rough couple of few years in both physical rehab and with dealing with clinical depression. Of course, he's also a grown adult multimillionaire by now as well. So maybe that would take the sting off.

If the inside is our biggest strength how do we match up against the two time defending champions? The Indiana Pacers hurt them last year in the playoffs with length. We may need to think along those same lines as our current guard corp are mostly all question marks.

Moving right along to our youth, NBA.com Hangtime Blog contributor Fran Blinebury ( @FranBlinebury ) wrote about the 2013-14 Rookie of the Year race. He mentions a couple of players, including one of our Utah Jazz rooks. They are:

Fran admits that it's a long shot and mostly a fun pick. He does offer up the name the "Stifle Tower" for his overt affect upon offenses. We all have big hopes for him as a defensive road block, but I do like our name "Mont Bloc" better.

Check out his article here, and get familiar with his work. We're going to have an interview with him next week : )

As for the actual ROY race, if you are keeping score, this is one more guy not putting Trey Burke in there to start things off. I hope these perceived (real or imagined) slights motivate him. Deron Williams (and Karl Malone before him) were absolute wrecking balls when out to prove a point. (Like D-Will breaking Chris Paul down and then dunking on Tyson Chandler) I hope Burke has some bite in him.

Speaking of dogs, Derrick Favors' pup Gotti has got to be loving it here in Utah because Favors himself seems to be making this his new home.

My neighbor sells dog kennels. To THIS GUY @dfavors14. PS Derrick congrats on your new house in SLC #JazzNation pic.twitter.com/JYJ0KuPNQZ

The DN's Jody Genessy (@DJJazzyJody ) wrote a GRRREEEAT piece all about Favors on Wednesday. If you haven't read it you need to read it now!

"If I don’t get nothing else out of my career, I want to win a championship," Favors said. "I’ve got goals of being an All-Star. At the end of my career, I want to give that speech — that Hall of Fame speech. That’s one of my biggest goals. But if I don’t get any of those, I at least want to win a championship." - D. Favors, 2013

How can you not love this kid? How can you not love Jody? This is a great article that talks about Favors coming to the Jazz, the new expectations, what drives him, and more insights into his workouts with Karl Malone. It, of course, also gives more info on his Favors has had to do everything himself and ask for more coaching -- it's not like the Jazz actually knew how to develop players. They struck oil with two self-motivated guys in John and Karl a few decades ago and didn't really make them better either. But that's just my opinion.

It's also of my opinion that you read Jody's great piece. It's FIVE PAGES LONG! It's almost as if he actually went out there and found something to write about, and then wrote about it! (Motivation for me to get better and/or be better, and write better.)

This is a great piece and offers up so much about the once really quiet kid who got traded in his rookie year.

Also, this has nothing to do with anything, but check out who retweeted this: 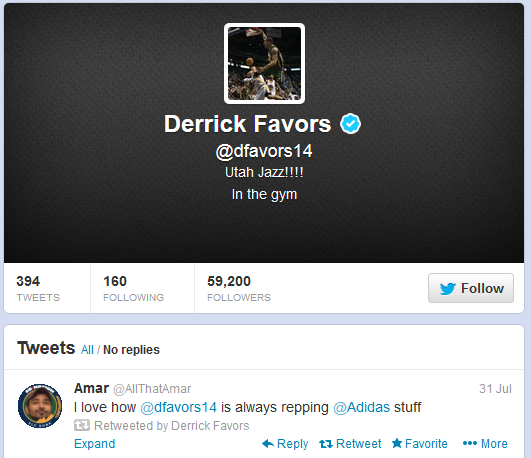 The "Adidas -- fun and not boring" ad campaign to come soon!

It seems like Favors and Enes Kanter (still in Ramadan mode) are going to be working out with Karl in Ruston, LA this week, according to the internet.

So, I had a few more things to write about (like the Truth behind Baron Davis' alien abduction -- via Fearthesword.com) but let's stick with the theme. Which of our players is going to be making their own Jazz baby first?