Share All sharing options for: The Downbeat #1134 -- The "September is here" Edition!

Chances are you are reading this on September, 1st, 2013. What does this mean to the average Utah Jazz fan? Well, it means that training camp is coming soon, and we're 60 days away from our first NBA regular season game of the year (Wednesday, October 30th at home vs. the Oklahoma City Thunder). What does this mean to me, though? Well, it means that I have a few weeks before Utah Jazz media day and there's a ton of stuff for me to still do this off-season. But don't worry -- I got this.

This season is going to be the BEST SEASON EVER for Utah Jazz fans in the information age. We may not win all of the games, or even make the playoffs. But the quality, diversity, and quantity of content fans will get this year will be more than the last ten years put together. There are so many great Jazz fans out there taking the plunge into more structured participation. The NBA.com website has more content than ever, and I presume the awesome guys and gals at the Utah Jazz marketing and media departments will only follow suite. The TV, radio, and newspaper people have all reloaded for another year as well.

What about us, the common fan? Well, we're all over this as well. There are more Utah Jazz blogs, great bloggers in few places, and more Jazz fans interacting on messages boards, social media sites, and on network sites like this (Thanks SB Nation!). Truly the greatest human accomplishment since fire, or vaccination, has been the internet. And because of it fans from all over the world can follow the team they love.

It's going to be an awesome year for Utah Jazz fans, the wins may not be there -- but when you can wake up every morning and read fanposts from people in Asia, South America, Europe, and many many more from here. I remember when you would have to work really hard to even FIND something on the Jazz to read about. Now we're getting new videos, posts, comments, and podcasts every day.

It's going to be a great season for Jazz fans.

A while back I was approached by Sheridan Hoops to write a quick 'preview' of our team. Of course, knowing me, I wrote way too much and Chris had to edit it down (mercifully). I felt like the five major points for our team this year would be:

"Last season, the Jazz had one of the most productive benches in the league. The reserves were talented and played hard whenever their numbers were called. But the Jazz allowed Al Jefferson and Paul Millsap to walk via free agency to elevate Enes Kanter and Derrick Favors, and Lindsey did not reload the bench at all.

"A weaker bench will sometimes let games slip away or turn manageable deficits into blowouts. Favors and Kanter will be replaced by Andris Biedrins (who scored 24 total points last season) and either rookie string bean Rudy Gobert, veteran string bean in Jeremy Evans or, um, Marvin Williams? That is a huge dropoff.

"Similarly, the team is going from having experienced players available to play point guard to relying on Lucas, Burks or Clark. At the wing, Hayward and Burks appear to be elevated to starters, leaving the bench spots to Williams, Brandon Rush (coming off an ACL tear) and the ancient Richard Jefferson.

"Utah’s bench has gone from being one of the more efficient, effective units to being a wacky neighbor away from a bad 1980s sitcom. Of course, that fits in with the larger picture that perhaps Corbin should have been starting his reserves. This season should test that hypothesis."

Yuup. Well you can catch it all here.

A while back I also got a chance to help Doug Banson on the Double Bonus podcast . . . it's an hour long show. Basically what I wrote to them was that this year's Utah Jazz team . . . is Gordon Hayward's team. You can listen to it here. (Jazz talk starts around 25:00 mark) And really, I DO think it is Hayward's team this year. 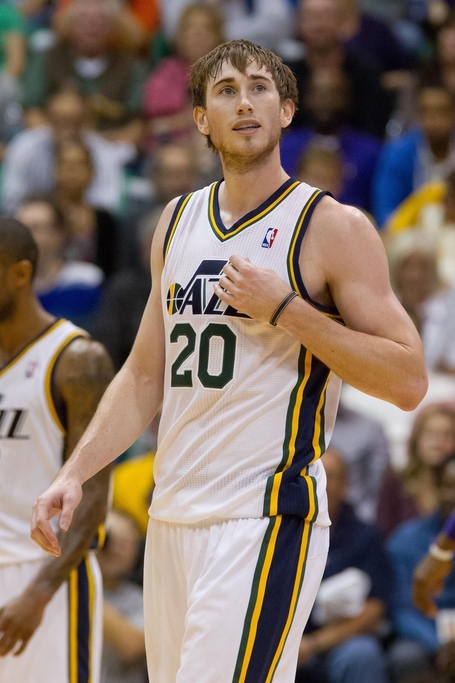 For the record, in the e-mail I wrote more than just about Hayward's marketing value. Here it is in full:

The Utah Jazz are, without a doubt, Gordon Hayward's team. The Jazz own the biggest Utah media outlets (well, the people who own the Jazz *also* own the papers, tv, and radio stations that get the most access and cover them closest), and the talking heads there have been on the Gordon Hayward campaign trail for a while now. He's featured in the marketing of the team (highway billboards, local tv spots, to the tickets themselves) more than any other player and is very marketable in that Salt Lake Valley. Other players would more logically be in the running: Trey Burke is the National Player of the year, Derrick Favors and Enes Kanter were #3 picks, Alec Burks is much more exciting, and Jeremy Evans is a dunk champ.

But the Jazz media and marketing division seem to have already crowned the successor without letting the alpha dog situation resolve itself with on-the-court production.

So the Jazz have already decided whose team is this.

Out of all the younger guys who look to get minutes this year, Hayward is also the only guy who consistently cracked Tyrone Corbin's rotation for big minutes back then Corbin was having his love affair with marginal vets on the wrong side of their careers (Josh Howard, Al Jefferson, Raja Bell, Mo Williams, Jamaal Tinsley, etc).

As a second year participant in the USA Select team he played well, and looks to regain some of his Butler mojo this season by having the ball in his hands, and not having to deffer to vets who may be higher on the pecking order.

Also he's a single white guy in Utah who doesn't have any tattoos.

The local media has anointed him already, so off the court it's his team.

On the court is where it matters though. And on the court he does have the most experience out of all the potential stars for this team. He's going to have the ball in his hands. And he plays on offense and defense (a surprising number of chase down blocks -- youtube it). The Utah Jazz are Gordon Hayward's team -- even if he has been force fed to us. He will be among the MIP candidates by the end of this season.

Everyone is getting ready for the season, not just Jazz fans. Here's some recent work done at P3 by our guys: John Lucas III, Trey Burke, Brandon Rush, Alec Burks, Ian Clark, Jeremy Evans, and the Turkish Tank himself, Enes Kanter (post Ramadan).

Excited for the season yet?

As an aside, when I lasted talked with the guys at P3, they said that Paul Millsap, Kyle Korver, and Jeremy Evans were their poster children.

Trivia! There have been only 17 different seasons of a Jazz player averaging a points / rebounds double double. Those 17 years are divided by four different players: Truck Robinson (twice), Rich Kelly (once), Karl Malone (10 times), and Carlos Boozer (four times). Al Jefferson did not ever average a double double for the Jazz.

What about passers? Well, there have been only 13 different seasons of a Jazz player averaging a points / assists double double. Deron Williams did it three times, and John Stockton did it 10 times.

No one did a 20 and 10 season with points and assists. But there have been 14 seasons of a points and rebounds 20 and 10 averages. Truck and Booz both did it twice, and Karl did it 10 times.

What about just, flat out, 20+ ppg scoring seasons? Only 40 (oh, this is the 40th year of the Jazz too, how cool!). Those 40 times are spread out between 10 different Jazz players.

TRY TO NAME AS MANY AS YOU CAN WITHOUT CHEATING! (HINT: Kyrylo Fesenko has as many 20+ ppg seasons for the Jazz as Big Al has)