Share All sharing options for: The Downbeat #1139 -- The "Make it Big" Edition

It's September. Kids are back to school, getting into the groove of things, but still going to bed every night with restlessness about what the next day will bring. There's so much possibility around this time of year. There are new friends to meet. New challenges to overcome. And new people to impress. It doesn't matter if you are going into second grade, or starting your last year of high school. This common extra-anticipatory feeling of Fall seems to hit basketball players, coaches, and fans alike as well. Fans go to be in anticipation for the upcoming year, after a summer off from the game we love to root for. Coaches have new challenges to identify. Players have new friends to meet.

If you've taken any management classes (and many of you people reading this have) then you know that one important phase of group work involves getting to a good place with your peers so that the quality of the work you eventually produce is of a higher quality. I think the Jazz front office got the jump on this early by having so many players go to Santa Barbara / P3 together this year. Shortly after the season ended Derrick Favors, Alec Burks, and Jerel McNeal (still somehow not officially added to the team yet) were there. Enes Kanter was there BEFORE working out with Karl Malone. All of our new additions, from rookies Trey Burke and Ian Clark to vets like John Lucas III and Brandon Rush have all been there. A vast majority of our players were all there at the same time. (Some going to P3 more than once this off-season)

That doesn't just mean they are at P3 for a few hours then go back to their hotel rooms to play video games. They played basketball ('getting run in') together this summer, and spent extra curricular time with one another as well.

In my opinion the majority of this season will be driven not by the front office, or coaches, or media personalities -- but by the players. We're only going to be as good as our players are. And if our players can come together as a team early, it will help us in now and in the long term. I think our players have that connection right now.

The Jazz players know that this is their team. And they seem to also know each other a little bit too because of the summer camp the Jazz brass sent their kids too this year. I'm happy to see this, and it will pay off in the future. 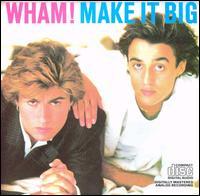 But when "normal people" think of Making it big, it means arriving somewhere and just owning that moment. One such "normal" person appears to be Ian Clark . . . who just made a big purchase.

I remember back in Medical School we had to take financial planning and money management classes where they widely told us to avoid buying a big shiny new car with their first paycheck. It was seen as a poor investment. Of course, medical professionals don't make NBA player money right off the bat. So, go ahead Ian. Make it big! Go nuts! We all know that former Jazz guard Jason Hart would have advised you to go for the Escalade though.

Clark is going to make a little under half a million $ USD this year. What big purchase would you make if you were 22 years old and making that kind of money?

Do you remember the 2003-2004 Utah Jazz? The team that won 42 games? Sure you remember them. Well, I'm trying to look at our former Jazz teams and try to see what we can learn, or at least be in awe of, from them. And that team was very interesting. Let's look at their first 20 games of the season . . . effectively the first quarter.

Well, over the first 20 games they did it with defense. The games were low scoring, and the Jazz were averaging 92.4 ppg while keeping the other team down to 91.9 ppg. It's a very low margin of victory, but by keeping the pace low we presume it minimized talent disparities. You either score or you don't. But it was not just pace in our favor, we were #14 in Defensive rating that year, and a huge part of it was based upon being #10 in DREB%. We have to take care of the glass. On offense we somehow survived by getting to the line and crashing the glass. (Something we can do with these younger guys on the floor)

We presume to have better offensive players on this team now -- but hopefully we can re-create some of that defensive cohesion as well.

The other big factor with the Jazz' hot (ish) start is that the team went 10-2 at home during the first 20 games. That's a good start to the season that helped keep morale up and allow for more practices early (less days lost to travel). That helps a team get to where it can be faster. If the team started off with some crazy road heavy start the team could have sunk early. It's a possibility.

What we do know is that THIS SEASON the Jazz play 10 of their first 20 games at home. 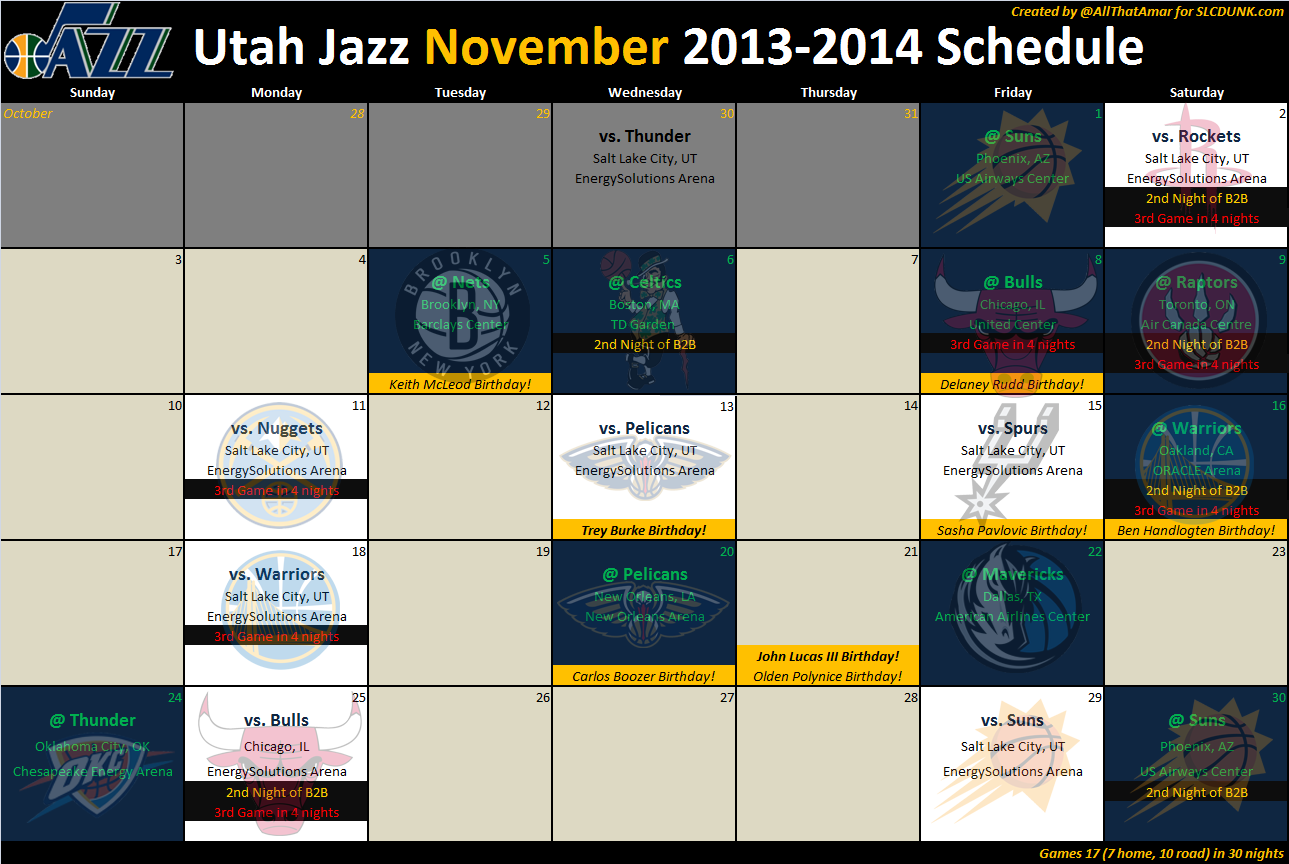 That's not bad at all. Maybe Yucca is right after all, and we're going to have a surprisingly good season? If we play defense and hard at home anything is possible.

Don't play words with friends with The Shums. I'm writing this while playing him. Actually, playing is entirely the wrong verb. He's playing with me. I'm, well, learning from this beatdown. I remember there was a reason why I deleted this app from my phone in the first place . . . and it seems to be him.

I find losing to be instructive though. And I hope our young coach and players feel the same way because, in the pit of my stomach, I feel like we are going to lose a lot. This is the "not skipping steps" thing Dennis Lindsey keeps talking about (that we also talked about 2 years ago before it became a media talking point -- but hey, no one is keeping score), we skipped the growing pains, and as a direct consequence, we also skipped the GROWING that we should have done. The team that we have right now is nice. But I think it is going to be a collection of interesting 5 man possibilities . . . with an almost certainty that a thin bench may let games slip away in the second quarter. That may actually be an improvement because LAST season we seemed to let games slip away in the first quarter.

Still, the point is that if you do something enough you should find a way to learn from it. Even if you are learning from a loss.

How many times do you think Gordon Hayward has re-tried this shot, alone in a gym by now?

Not quite over Ante Tomic? Clearly I'm not. He's playing for Croatia right now in Eurobasket, and well, he's doing things. Croatia got killed by Spain in Game 1 by 28 points, and Ante was kind of a no-show. They bounced back to defeat Georgia by 1 point in Game 2. Tomic had a 7 and 7 game. That's points and assists. He finished with 2 rebounds. Yes. Things indeed. So far he's averaging 5.0 ppg, 4.0 apg, 3.5 rpg, and shooting 37.5 fg%. Yikes.

That's a huge drop off because he was flat out balling leading up to this point. Here's an excerpt from the Eurobasket site itself:

Despite being one of the top European big-man prospects in the past decade, 26-year-old Tomic is only making his second EuroBasket appearance. It was merely after an impressive Adriatic League MVP campaign and signing with Real Madrid that he got his shot in 2010. He immediately became one of the pillars of the team, but he is still waiting to accomplish success at any level wearing his country's jersey. At EuroBasket 2011, Tomic was Croatia's leading scorer (16.6) and rebounder (6.2), as he shot the ball with a stunning 73.9% accuracy. However, Croatia disappointed miserably. Now, he is coming off arguably the best season in his career that saw him lead FC Barcelona to the Euroleague Final Four and Spanish League finals. Tomic will not overpower, but rather outsmart his counterpart. He always had a soft hand to sink shots, but used enormous talent to develop a series of moves around the rim, and finish with high confidence. It all allows him to take over games inside the paint, and Tomic is eager more than ever to take a leadership role, put an end to the Croatian misery, and snap the 18-year medal drought.

Dude needs to pick it up. He needs to make it big. Or play like a big. Or something else ending in big. He's 7'2 ! I'm beginning to think the dude is never going to come over to the Jazz . . .*sniff*