Which players are 'big deals', Greg Ostertag is nuts, Trey Burke is a PG and not injured, Jazz trivia and more!

Share All sharing options for: The Downbeat #1247 - The "Jerry Sloan is fired up" Edition

So the Utah Jazz lost again on a Friday night. I'm not mad. It's hard to win without your best player, even against a bad road team. Gordon Hayward is just that good for us this season, such that his replacement level player (I think this is a baseball term or something) can't do what he does. Of course, you could argue that the Jazz would lose games too if they didn't have Derrick Favors playing, and everyone else was healthy. We also have evidence that no matter what we just can't win without Trey Burke either. Trey and Gordon or primarily offensive players this season, and Favors is relegated to being "just" a defensive force. What I like doing is adding up some advanced statistics in a non-scientific way, but it still gives us a picture of how big a part of the team they are when they are on the floor. You're visible on the floor most when you have the ball in your hands. And your actions mean the most then as well (for the most part). So if you get a rebound you are putting your hands on the ball. If you turn the ball over, the ball, as a result of your actions, goes to the other team. Similarly using the play and passing also matter. If you sum USG% with AST%, TOV% and TRB% you get a number. TOV% is based upon 100 possessions while I do not know if the others are not so the 'units' may not work out accurately. Someone nerdier than I can check that out.

But if you sum these values together you get a good picture of who is a 'big shot' on a particular team. (N.B. I may need to make this a larger post)

Having a high 'sum' value isn't always a good thing. Gobert and Biedrins both have values above 60%, but the majority of their affect upon the game is their turn overs, and then their rebounds. Where as a player with a sub-60% sum like Alec Burks appears to be more important in the course of a game. Ultimately though these values are approximations of what a player does when they are on the floor -- really how involved they are with what happens during the game.

I expected to see Hayward and Burke lead this, and for the most part they do. How does that compare with the other players leading their teams? (N.B. This is sorted by Sum value, not by MPG)

Hmm, well, the cut off was a 60% sum, and all of these guys play at least 30 mpg. The skew is towards ball handlers (duh), but in some cases you see bigmen on this list like Boogie. These guys are big deals for their teams, and their values for the most part are larger than that of the individual members of our squad. So while I feel like no Gordon, Favors, or Burke almost means an automatic loss; it may not be because they are "huge" parts of our team when compared to star players at all. I guess it just could be that we have shallow depth and can't make up for their loss.

Still, G-Time, Devastator, and Trey are necessary for our team to have a chance to win games.

Sure, the wins aren't always there in a developing year. But one thing that should be is that sense of "I got your back, you've got my back" that teams that gel seem to have. I miss passion. We've seen more fight this season in twitter than we have in some games. Part of that is building a team of abject pussy cats (and if you have a tiger, de-clawing him like they did with Enes Kanter). But basketball is all about passion. Don't play unless you want to win. And you don't win unless you want to play hard.

Often time you heard Jerry Sloan talking about playing with pride. This season I see our young guys playing hard, but it's easy to get their head down. What I really miss is a coach who doesn't blame every loss on the age or experience of his roster.

I want to see more of this, in the next 40 games. One way to keep your job is to fight for the players. That's what a real players coach does. Heck, bring Rudy Gobert back to yell and get technical fouls too.

Trey Burke is really great and I am glad he is on the Utah Jazz. He may not be a huge truck of a point guard like some others (Russell Westbrook, Will Bynum), and he may not be a speedy sylph (Isaiah Thomas, Ty Lawson) -- but there's one thing Trey is that a lot of other point guards aren't. 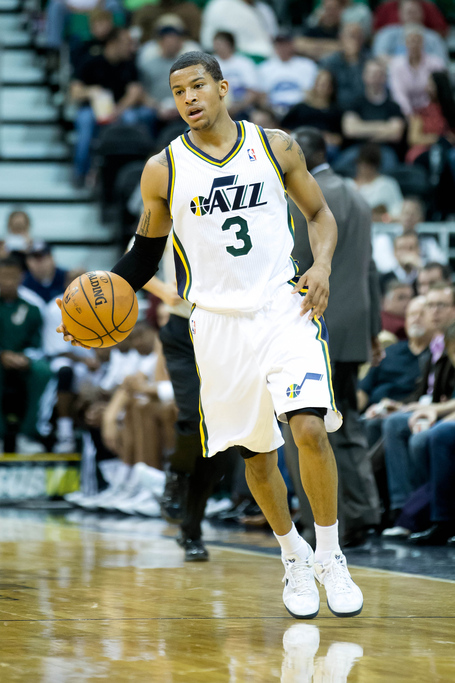 While this season is a series of ups and downs, I can still see things to be happy about. And Trey is one of them.

This is the #1247 downbeat, so that got me thinking about stats, because well, John Stockton and Andrei Kirilenko. So here's some trivia for y'all:

There have been 104 different Utah Jazz players who have finished a game with at least 2 Points, 2 Rebounds, 2 Assists, and 2 Steals!

Of course, this is data from 1985-2014, so it may not be all inclusive. Some of the names on the list are no-brainers, others are head scratchers (Man, the number of times Greg Ostertag did this is astounding. Even more astounding are some of the players he is ranked higher on this list than!) (Hint: One of them is Mark Jackson)

So the team is stabilizing now that people are healthy and players are playing specific roles. The team was rumored to be making a trade a few days ago. The team was also supposed to be changing their head coach if you listened to Vegas odds. I don't think either thing is going to happen. What do you think?