Share All sharing options for: The Hot Rod Edition - The Downbeat - #1258

Some truly sad news about Hot Rod Hundley today. Diana posted this earlier, which cites the report published by the Salt Lake Tribune. Like many of you I'm sure, I grew up as a Jazz fan with Hot Rod and am grateful for that. I am glad he is well enough to attend Jerry Sloan's ceremony. All the best + thoughts + prayers for Hot Rod and his family.

WVU Sports published a story on Hot Rod's back story back in 2010 when they retired his jersey. He was an abandoned child that bounced around from home to home and like Harry Potter, lived in a room under the stairs as a kid. It was while he was in that room that he began listening to basketball games on the radio and keeping his own scorecards. It's definitely worth the read. Here's video from the ceremony. Forward to the 4:30 mark. The crowd really wanted him to to shoot the ball, and he sinks a hook shot. His reaction to making the shot is awesome. Always the showman. Thanks to Diana, here's a Deseret News timeline of Hot Rod's career: 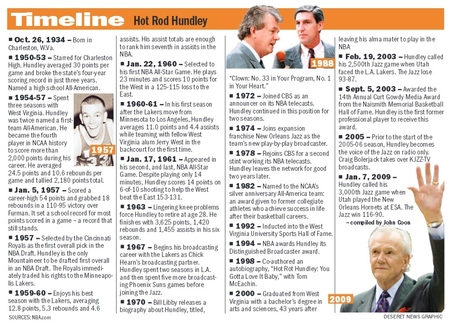 It's never too early to start speculating...especially when you're in the middle of a blasted 2-game week. If you had to choose, which Jazz player do you see most likely moved at or before the trade deadline?

Let's end this on light note. Bitoko has given us the gift of an off-day unicorn story. This is the first time we get to see what's going in the practice facility. Teaser: The players are asked to emulate Unicorns on defense. Read and laugh!