The Downbeat #1241 - The "Reality and Fantasy" Edition

How did the Jazz lose to the Lakers; Jeff Hornacek is a good coach, that doesn't mean Tyrone Corbin is a bad coach; Trey Burke is ROM-tastic; why should we tank, and more!

Share All sharing options for: The Downbeat #1241 - The "Reality and Fantasy" Edition

The Utah Jazz lost to the Los Angeles Lakers last night (recap here), and thus ends a streak of winning Friday Night games. The Jazz beat the Denver Nuggets on Friday, December 13th; and then the Los Angeles Lakers on Friday, December 27th. (Yeah, and they lost to the Atlanta Hawks on Friday, December 20th, but still!) The Friday night syndrome in a road city thing seems to be a deal with our stimulation starved Jazz teams (this used to be a thing back in the 80s too). But more than that, I think it's a product of the Jazz just not being good on the second night of a back to back, when the second game is a road game.

The story of the night, though, was fourth string point guard Marshall. Bereft of the services of Steve Nash, Steve Blake, and Jordan Farmar the University of North Carolina guard put up 20 and 15 against our squad.

Coach Nick breaks it all down here, and this is a good example of our Tyrone Corbin defensive scheme against dribble penetration as well. It's . . . uh . . . an educational video, to say the least.

Do you like to read things that make you sad? Check out this great article by CBS' Matt Moore about what a great job Jeff Hornacek is doing this year, and HOW he is doing it.

The Phoenix Suns have an average age of 26 years old. They entered the season having traded their starting center Marcin Gortat, their best power forward in veteran Luis Scola, and having seen an offseason of turnover both in the general manager's and head coach's office. They traded Jared Dudley in a package deal for a raw point guard who had been a backup his entire career. The most prominent thing about them was the stunning number of picks they have in the 2014 draft.

It was supposed to be a tanking year. Struggle with this young team for another season as you try and learn what you have on roster, then draft high once more with a few extra picks, build a new core, and really start to put some wins together starting next season.

The Suns are 19-11, eight games over. 500 with signature wins over many of the Western Conference's powerhouses. They compete every night, but lots of young teams do that. What's stunning about these Sons of the Desert is that they play such fundamentally sound basketball. They find the open man, they move the ball, they work for high percentage looks. They look and play like a veteran team despite six of their top seven players being 28 or younger, several just 24.

Where did this team come from? And how is it that a team trying to do so many new things with younger players comes across like a legitimate Western Conference playoff team?

The man behind Phoenix's surprising run this season acts like he doesn't have a care in the world. Jeff Hornacek may be the most laid back NBA coach you're going to find. He speaks with an easy smile on his face, like a guy who happened into a comfortable job he can enjoy. That's a pretty long walk from the hellacious pressure cooker that warps men's hairlines and weathers their faces. Take a look at how much Jason Kidd has aged in just a few months on the job.

But while other first-time head coaches have struggled, Hornacek has accomplished that rare feat -- he's truly gotten through to their players.

But hey, Tyrone Corbin is pretty good too. If he didn't go to the NBA he was going to work for IBM, that's what they tell us. (They never tell us what his job would have been, was it to get boxes up off of high shelves?) We know Ty is a great communicator too -- just ask former players like Jamaal Tinsley who didn't even know he was injured after Ty said he was. Oh, that's a bad example. Let's ask C.J. Miles and Raja Bell. Ooops. Well, Richard Jefferson loves him! That's gotta count for something!

The bottom line, though, is that if Jeff Hornacek is a good coach and people say as such that doesn't automatically mean Tyrone Corbin is a bad one, or that is what people are saying. Ty's record speaks for itself. 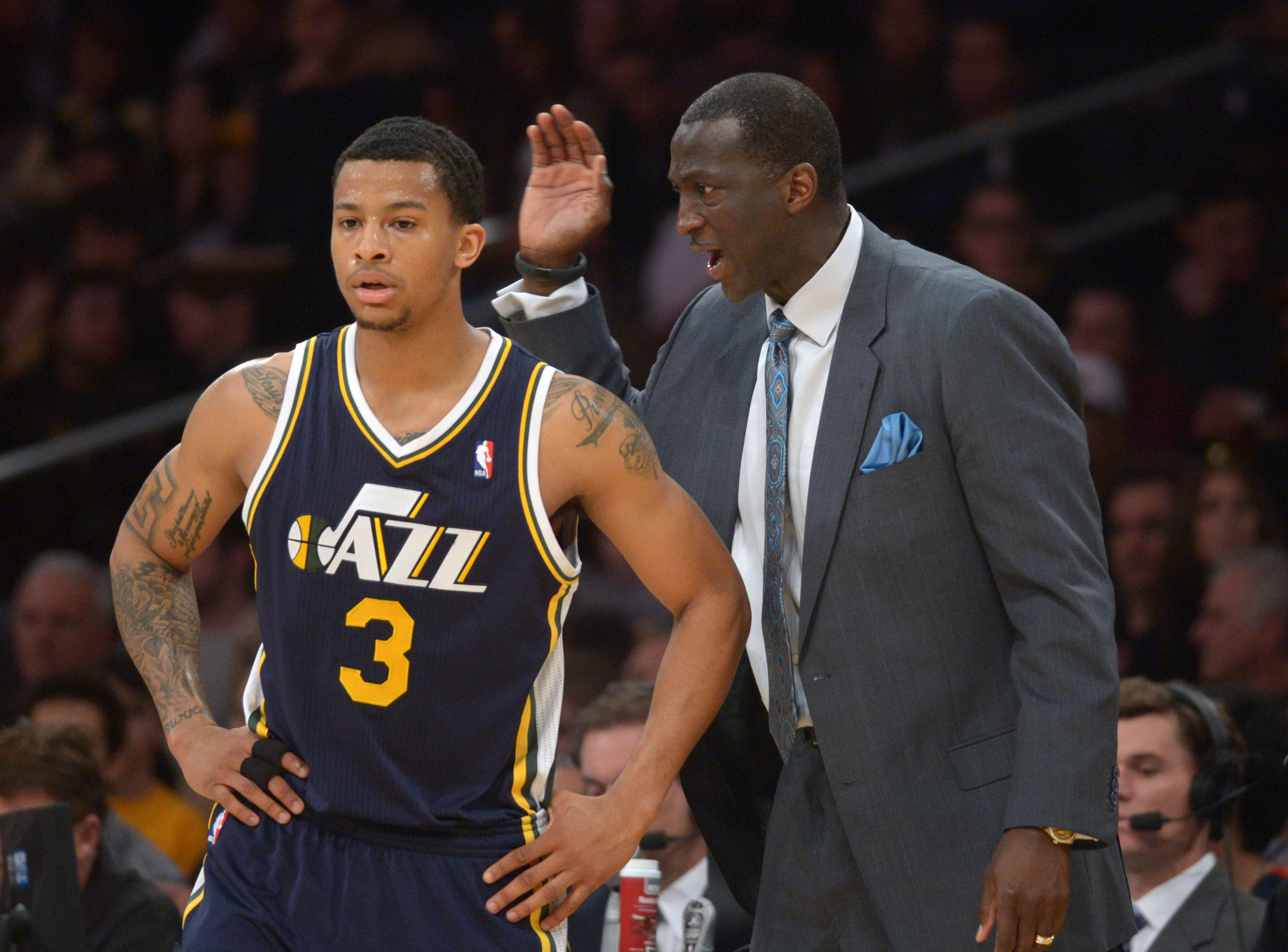 Yucca Man had a great post congratulating Trey here, and you should read it. He details some other cool facts!

Fans of the Milwaukee Bucks have purchased a Billboard that urges the team to 'tank'. The article on this is on Deadspin, and you can check it in full here.

Remember this: for how awful and dumb the Knicks were last night, they were still better than the Bucks. There's not a lot of short-term hope in Milwaukee, so some concerned fans have paid for a billboard that would seem to emphasize lottery balls over basketballs.

The folks at SaveOurBucks.com wouldn't call it "tanking." They've got a multi-part plan for the Bucks to return to competitiveness and stay in Milwaukee, and it involves front office moves and fan support. But the key is to eschew the Bucks' usual strategy of band-aid acquisitions in favor of trading away veterans, letting young players get minutes, and lose their way into a top pick in next year's stacked draft. So: tanking.

We just beat the Bucks but should be looking at the same long term goals instead of attempting to be perpetually being self satisfied with mediocrity. And really, I think that is what this should be all about.

We've talked about tanking on this site before. We all have our own idea about what tanking means. I think tanking is a strategy in game to perform worse than you should. This means, in the Golden State Warriors case, goaltending a last second shot to automatically give the other team points, and lose the game. For the Jazz this could mean starting John Lucas III over Trey Burke (which we did for a bit), or playing worse players over better players. Are the Jazz tanking this year, for reals though? The head coach is trying to win as many games as possible. Our young guys, when in the game, are busting their butts to prove that they deserve to be on the floor, and perform well as a team. I don't think there are on court agents trying to tank for the Jazz this year.

If anything, the front office constructed a flawed team (if we weren't trying to maximize ping pong balls, why did we let 4 of our 5 starters from last year leave when we had tons of cap space?). Is a poorly constructed team tanking? I think that's a grey area. It's that inherent 'nobility' that guys like Randy Rigby will talk about -- we did it "the right way" and that we're not "tanking".

The Jazz aren't tanking by the normative process that's for sure. They're trying to win every game, even if they didn't get much help from the font office this year. And why is that? It's because GETTING A TOP 5 PICK THIS YEAR >>> anything this team could do this year. It's that simple, and we have to live with that.

Jazz fans don't need a billboard asking our team to tank; because at full health we're a team that gets pounded on by a crappy Lakers team, and destroyed by any real contender we play. The best pick in the draft is the best. A Top 3 pick is still awesome. Top 5 in this draft is still a solid player who improves our team. Anything outside of the Top 5 is a wasted season though. We don't have a Scott Layden on the scouting staff picking out John Stockton (#16) and Karl Malone (#13) in the middle of the first round anymore. We need a Top 5 pick.

Tank or no tank, I think that would improve the future outlook of the team more than if Richard Jefferson is shooting 40% from downtown for a season.

When I'm not stuck with horrible work hours, or stuck in air ports, I try to have fun now and then. For the Playstation 4 the guys and gals at 2K Games put out another installment of their money making series NBA 2K. The most recent one for the next-GEN consoles, NBA 2K14, has a number of new features or changes to the old game. One gameplay mode that I enjoy has been around for a while, MyTeam. In the MyTeam game it's basically a card collecting game where you get a starter pack (which can have players, coaches, uniforms, etc) and you have a team. The more you play the more currency you have which you can then trade in for additional packs. If none of this makes sense then I apologize.

You can't win that war.

Instead I endeavor to make the best possible "Jazz" team I can. Everything has to be Jazz related, but because of the limitations of Jazz stuff (they don't make a lot of stuff for the worst team in the Western Conference), I had to fudge a little. It's a Jazz-valid card to use to create my team if:

Trying to self-impose more limitations in an online game are hard, but rewarding when things finally work you way. I started off with just Antoine Carr, and had to fill up the rest of the team with bad players (so I avoid using a 'star' for another franchise). In the new year 2K released selected team packs, that I just spammed. There were only a few, but among them were: the Atlanta Hawks, Brooklyn Nets, Chicago Bulls, and Cleveland Cavaliers. So i put in a lot of currency into those packs until I got: Paul Millsap, Kyle Korver, DeMarre Carroll, Deron Williams, Andrei Kirilenko, Carlos Boozer, and C.J. Miles. In the process of my play I kept collecting more Jazz-valid players and replaced the other bad players from non-Jazz teams on my roster. Eventually I unlocked legends players Dominique Wilkins (c'mon, the Jazz drafted him) and Gail Goodrich (he played three seasons with the New Orleans Jazz). All in all there are 55 Jazz-eligible players you can collect, and it's by random chance that you get any with these packs that you have to buy. (57 if the game updates and includes Ian Clark and Mike Harris in this mode)

Here are some stats for far this "season"

So far after 5 games I am 2-3, with wins against the Jazz and Orlando Magic. I have losses against the Atlanta Hawks, Charlotte Bobcats, and Washington Wizards. What I've learned is that I'm not very good at this game. I'll try to get some video up of this "dream" Jazz season over the next few weeks. Our current Jazz team may be fun to watch but mismanaged, but you guys should also get to see a boring team that's managed poorly too!