Preseason summary; what to look forward for; what to aim for next; is our defense really this bad; and Jody is amazing. But we knew that.

Share All sharing options for: Utah Jazz Trey Burke and Dante Exum will hopefully prevent the team from reaching mediocrity

By the time you read this, I will already be dead. Well, probably not. (...probably...) I am flying back home today, so there's a possibility that my flight may never land, and I'm stuck in some cloud level, or something. I spent the last week in my home and native land, Canada. It was Indian / Hindu New Years, and if anyone is even remotely familiar with our culture then they would know that everything takes a long time. Child Births aren't even official until the kid has been around for six days, and Weddings technically start even before the Groom's side has even left their homes to travel to where the Wedding is. This may explain why my posts seem to always be so late in the day as well . . . I dunno.

What I do know is that the Utah Jazz lost to the Phoenix Suns last night, and ended up going 5-3 in preseason. The Wins were against the Portland Trail Blazers (twice), Los Angeles Clippers, Oklahoma City Thunder, and the Los Angeles Lakers farm team + Kobe Bryant. Quin Snyder elected to rest his star player, Derrick Favors, in two of those losses. It's conceivable that Utah could have gone 7-1. But that just would have been unnecessary for what the team is a) trying to do in the big picture, and b) trying to do, in order to take advantage of a preseason and how it's for trial and error.

From what we have seen now I think it is fair to say that we have a general idea of what our team can look like when they are working well, and what the team can look like under crisis situations. As a team of super young lads (average age is 24) there's a larger standard deviation on what 'normal' play looks like. As a consequence, on any given night Snyder's club may look and play like world beaters, or confused kittens. Oddly enough, sometimes in the same quarter. (Linguo: "Sentence Fragment.")

Overall I think we like what we see. Passing with purpose. A defensive identity that uses the talents of the players the front office decided to get on this team. Dare I say it, youthful vigor? It's going to be a fun year if you look at what we saw in the preseason and expect at least SOME of it to carry over.

Maps! Maaaaps! Okay, I get that not everyone was isolated on a tiny island and was partially raised on old National Geograpics, but I like maps. SB Nation threw a whole bunch down on just the NBA. Check it. They go over historical information like the original NBA teams, the ABA legacy, who moved where, and other normal things like "Ringzzz". But there's more to the NBA than just those normal things. Similarly, there's more to this article than just boring old maps.

I particularly enjoyed this one, which shows where NBA players actually come from, in the continental USA. 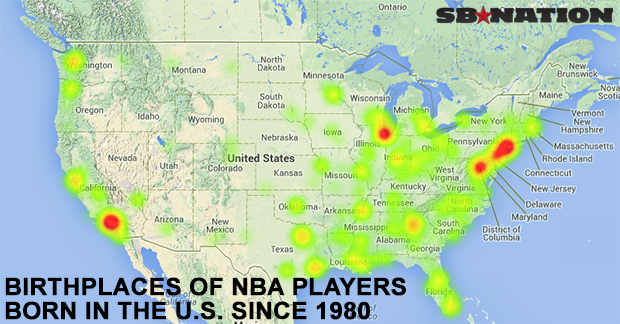 If you juxtaposition that map with the one I made the other day about where our Utah Jazz players come from you see just another sign of just how unique this Jazz team is.

Fun, no? NO? Shut up. Maps are cool. (*Amar imagines getting a fist bump from Magellan.*)

The good people over at FiveThirtyEight dropped their NBA Preview, and the good news is that, well, they rip the Los Angeles Lakers a new one. The bad news is that, welp, they weren't too kind to the Utah Jazz either. Check out one of their graphics below, and be sure to read their entire preview of the Jazz here.

Personally, I would switch out Jeremy Evans there for rookie steal Rodney Hood. And perhaps 86 good old Steve Novak for Ian Clark, but in reality none of us really know Quin Snyder's true rotation. We can guess. And I think my guess isn't half bad. But judging the Jazz based on the concept that two of our regular rotation guys are going to be limited power forward specialists would be to overlook what Utah brings to the table at the wing spot. Now, yes, sure, Carrick Felix is probably the next Fennis Dembo. But I haven't sold my Ian Clark stock yet. I think he's going to have a pretty okay season and be more than just "that third rookie from 2013-14".

Back to the 538.com preview, I like the idea that Alec Burks has no overt weakness. But the greater picture, which the 538 guys and gals are great at noticing, is that many of our players have not historically been good defenders. If Quin can get the Jazz to play solid defense this year it will either prove that the system was wrong last year, or that the impression of our players by the national media is wrong. Or probably both.

But their numbers do not project very kindly on the Jazz.

Utah Jazz fans (and let's be honest, front office execs too) had been focused on the 2014 NBA Draft for a while. I know that most of us at this site were keeping tabs on those players and situations for years before we got to June of 2014. It's important to look at the big picture and try to plan ahead. Now that our team did bottom out (25 wins is the bottom, I hope.) and the on-court performance seems to be improving it's important to look at the next target for this franchise: not being stuck in mediocrity.

In terms of this life-cycle from being bad, to trying to be good, the Jazz are behind a number of teams. SB Nation's amazing Paul Flannery dropped some serious science with his piece on the Memphis Grizzlies, Charlotte Hornets, and Sacramento Kings.

"The worst place to be is not the cellar, but somewhere in the big, unhappy middle."

A lot of teams are able to rebuild back into the doldrums. That's where the Jazz were stuck in those Al Jefferson / Paul Millsap / Tyrone Corbin days. Good enough to beat the bad teams consistently enough to be stuck in the middle. The squad was not a real threat in the playoffs, and in fact only made it once. In the reality of the NBA there's no glory by being a high lotto seed, or a low playoff seed. You have to rebuild, and actually accomplish something. Memphis went to one Western Conference Championship. Charlotte finally made the playoffs again. And Sacramento just barely beat out having to move to Seattle. These three teams are at different life cycle states for their respective franchises, but all at risk of being suck.

So check out Paul's long read. It's amazing. And he is too. I only met him briefly at the NBA Draft combine last spring, and I was taken aback by just how good he was. I did not feel worth repping the same website as him at the draft. And after reading this piece I don't feel like my work is worthy of being on the same servers as his either.

It's not all doom and gloom and defense, and maps here. This is still supposed to be a fun website. Thankfully there are a lot of fun people out there who make us smile every day. One of them, the aaamazing DJ Jazzy Jody (Jody G of the D to the N), tweeted this yesterday. And I wanted to share it with the class:

Nice shot, @gordonhayward. People driving north on I-15 at 3300 South get to see some @utahjazz billboard basketball. pic.twitter.com/TbBkh7A8ZM

This is going to be a fun season. Fun players. Fun games. And fun things to talk about all season long. I can't wait to host you all here at SLC Dunk for another season. Let's make this one the best season in a long time!