Utah Jazz rookie Dante Exum taking the steps necessary for a long and healthy career, plus Star Wars and more!

Share All sharing options for: Utah Jazz rookie Dante Exum taking the steps necessary for a long and healthy career, plus Star Wars and more!

The Utah Jazz have one more game this month, and have a chance to go 6-11, which is a very respectable mark. What's standing in their way? The Los Angeles Clippers. The Clippers are 10-5 right now, and 6-2 on the road. They are 7-3 in their last 10 games, and have won 3 in a row. That said, they are only 7th in the West right now, which shows you a) how competitive the conference is, and b) how inconsistent LA has been.

Of course, this game will be the final game of a seven game road trip, which had them play @ Orlando, @ Miami, @ Memphis, @ Charlotte, @ Detroit, @ Houston, and now @ Utah. They played last night, and this game will be their third in four nights, and a million other things regressing all the way back to their 7th game in 11 nights.

The only game they dropped so far on this trip was a loss to the Memphis Grizzlies (107-91), otherwise they've been handling their business.

They'll be looking for their 11th straight win against the Jazz tonight. I hope it doesn't happen, though.

A 6-11 month is something to work with, a 5-12 month where the team drops the last five straight games is less impressive.

Jeremy Evans sprained his left ankle during practice Friday, so the seldom-used substitute's availability is questionable for Saturday night's game against the Los Angeles Clippers.

Coming off his most productive season in the NBA, the fifth-year Utah Jazz forward hasn't been a part of new coach Quin Snyder's rotation, even dating back to the preseason.

Evans has only seen 13 minutes of action across five games.

"That's probably our deepest position," Snyder said. "If you look at that power forward spot, we've got four guys that can play that position and Derrick [Favors], who can swing over at times. There's a glut there. For me, the positive is how hard both Jeremy and [Steve Novak, another forward who has seen his role decreased some this year] continue to work and the ways they're contributing to the team outside of immediate playing time."

I think Jeremy Evans is a pure hustle guy who can help a team. Some teams have designated shooter specialist (like Steve Novak); Evans exists as a designated finisher specialist. It may take an injury to get him on the court though.

And as fate has it, it's currently an injury right now keeping him off of it.

Why not? Which Jazz player (current, and historical) would best fit in a Star Wars movie? I'd have to go with Toure' Murry (he already has the Star Wars name), or possibly Rudy Gobert (are we sure he's not CGI yet?) for this year's squad. But historically it's clear that we'd go with Mark Eaton . . .

Did you know that Dante Exum is working on his stamina by giving up eating junk food? That's what Marc J. Spears remarks in the one-off, stand alone line here. 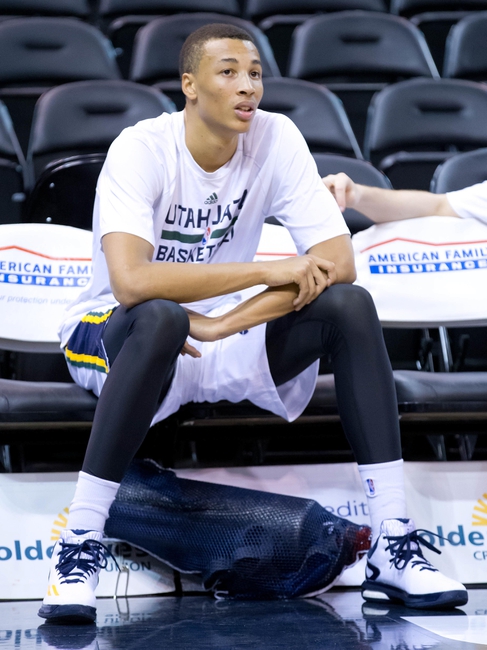 I think that's cool, because a) he's a professional athlete, and b) most Teens today in America are "misnourished", which according to A. Rosenzweig (2014), Amy De La Hunt wrote about back in 2003 as eating "enough calories . . . but not necessarily the right amounts". You don't have to look too far back in the past to see how former professional athlete Kyrylo Fesenko used to eat, and compare it to the concept that Dante is going on the right path.

This is particularly important for Dante because good habits early in his career will only extend it. And particularly good for him because as a point guard he has to have the stamina to be ready to run all night long. Some of the players who travel the most miles per game are point guards. Deron Williams (#2), Kemba Walker (#3), Damian Lillard (#5), Tony Parker (#6), Reggie Jackson (#7), Kyrie Irving (#8), Brandon Knight (#11), Stephen Curry (#17), and Ty Lawson (#18) are all in the Top 20 so far this season.

So no Pizza and Burgers for you Dante! (Also, you can send them to me, I'm not in training for anything.)

Wow, I made it this far down without posting a Utah Jazz video? Okay.

We miss you, Big Dawg!

Antoine Carr would be so good on this team . . . and our bench would actually have someone off of it who can score.