Around the media... thoughts from last night.

We really have nothing in the line of a consistent defensive scheme. And talented bigs with legit size really hurt us -- we've seen this the last few seasons whenever we play teams with two good bigs. .asd

Call it a silver-lining setback, but Utah’s latest defeat wasn’t nearly as demoralizing as the 38-point debacle in Houston or the 18-point shortcoming in San Antonio they suffered in recent days.

After fighting for a playoff spot in each of his first three seasons in Utah, Hayward finds himself steering a young Jazz team toward the lottery. The loss was the Jazz’s 11th in 12 tries, giving them a 22-47 record — the fourth-worst in the NBA.

Lots of weaknesses were exposed when playing the best of the West and at the same time lots of really good things showed up over the past week from this young team.

There was a little discussion on Twitter last night about starting the young five. It was a healthy, constructive discussion and I don't think anyone's feelings got hurt. The questions was asked by

.@ZachLowe_NBA @slcdunk @gordonmonson Who decided Ty Corbin has to start all the young lottery players together? Asking for a friend.

I don't think they have to start together, but time together can only be beneficial.

I don't like the idea of investing time/experience players that won't be back. We will have the same feeling next year that we do this year about Kanter and Favors....Man we should have developed them sooner. Anyway, the great teams, Championship teams, need their core players to play together for a while to win. See... Miami, Dallas, Lakers, Jazz, Bulls, Celtics ect. I don't know which three of the five young guys will be our core, but the five guys of the future haven't played together very much... 32.5 minutes to be exact, roughly 2 and1/2 quarters of the possible 276 quarters this season. This number doesn't account for injuries, but still check out line Number 16. 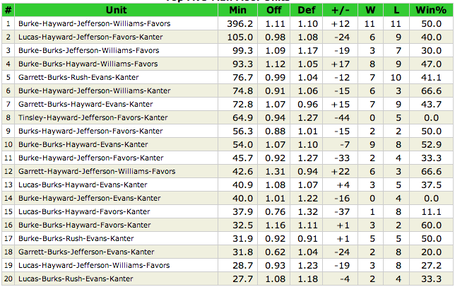 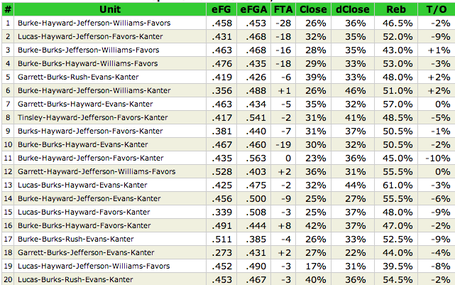 Defensive Breakdowns. What are they? And what do they look like? Can they be blamed on one individual player on that one specific play. Or, it is it a collective failure of the five guys on the floor. I am under the belief that there are generally three reasons why people don't do things. 1) They don't know how to do it. 2) They don't have the resources do it i.e. money, time, skills, ability ect.  3) They don't want to do it.  Most of the time I feel that our defensive breaks downs fall into the the first two categories. For example, when Trey gets beat off the dribble by Conley, it's not that he doesn't want to play defense, nor that he doesn't know how, it falls into that he doesn't have the skills to do it, Yet. Eventually, I think he will become better. I think this can be said for  a lot of the players on the floor. The question is are the players being taught either on their own or through the coaches how to do it, or given the resources to do it better? We are a young team and time will be part of the growth process. Let me know your thoughts.

For gits and shiggles The ESPN Draft Lottery Machine... Run the simulator and let us know what you got...Good luck in your brackets.