I'm filling in for MyLo today.

Share All sharing options for: The Downbeat #1309 -- The "Building a contender" Edition

The Utah Jazz lost to the Detroit Pistons last night, at home. That's such an odd thing to me. It breaks a 10 game win streak in Utah for the Jazz against the Pistons -- which extends all the way back to 2002-2003. For those keeping score at home, that is BEFORE the Pistons won their title with Ben Wallace, Rasheed Wallace, Chauncey Billups, Richard Hamilton, Tayshaun Prince, et al. (Mehmet Okur too!)

In the larger picture it's interesting to see how championship teams are formed. For these Pistons, their GM Joe Dumars made a lot of moves:

The Pistons didn't just do "one" thing. That's the impression we get from other good teams now. For example, we believe that the Miami Heat just became good because of free agency, when we forget that Udonis Haslem, Dwyane Wade and more were draft picks. We think the Oklahoma City Thunder are just a collection of lucky draft picks -- but they made trades to build that roster too, how else do you think they got Kendrick Perkins? Even the Memphis Grizzlies are diversified, after all it's not just trades that got them Marc Gasol and Zach Randolph, they drafted Mike Conley and Rudy Gay.

Perception is wrong here. And in order to build a good team you have to do all three things: draft well, trade well, and sign well. Or be in a big market with an owner who doesn't fear the salary cap. But that's not an option for the Jazz.

So, which of these three things has our franchise done well? I'd say we've been drafting well as that first step to building a contender. We have a lot of room for improvement with our recent trades (save for the Deron Williams trade), and our free agent signings have been, well, our last signing was John Lucas III. It speaks for itself.

What should Dennis Lindsey focus on now?

The SL Tribunes Kurt Kragthorpe dropped a bomb today. He feels as though Jazz fans deserve more than they've received this season.

This is the time of year when the reality of life at the bottom of the NBA standings makes coming to the games seem like a major chore.

That’s why Jazz fans deserve credit for their attendance Monday night, when Gordon Hayward scored 32 points but the other players were mostly no-shows in a 114-94 loss to lowly Detroit at EnergySolutions Arena.

When the Jazz (23-48) have the fourth-worst record in the league, everything about the nightly production feels manufactured and overdone. The music’s too loud. The bold, giant screens merely magnify the team’s mistakes. Even the Kiss Cam seems silly. And the pregame intro video? Wow. Do we really need to keep seeing Andris Biedrins, Brandon Rush and John Lucas III with glowering, menacing looks?

This is a forgiving, appreciative sports market, but Utahns never should have to endure another season like this one. There’s a strategy in place to keep that from happening, starting with a high draft pick in June and the development of young players who have shown intermittent promise.

The Jazz have asked a lot of their fans this season, and they’ve stuck with the team to a remarkable degree. Even if the 2013-14 attendance will be the lowest in the 23 seasons of ESA’s existence, an average crowd of 18,000-plus is impressive to me.

Yikes! Also mentioned in the game recap (done by the lovely Diana Allen) comments section was that playing "Stand By Me" after home losses seems to fit the tone of what we (fans) get from the franchise.

I've been critical of the way the Jazz front office and big money boys do things. Seems like I'm not the only one who is noticing cracks in the facade.

One thing Kragthorpe doesn't go to town on is the matter of the bill of goods we were sold. I'm sure fans would come into the ESA in DROVES to watch the young guys play hard and die hard every night, running up and down the court. If this Jazz team played like the old Frank Layden Jazz people would show up. Slowing the game down and playing veterans who produce diminishing returns and are increasingly on the team for fewer and fewer seasons (yet we're being told to buy their jerseys) isn't fun for fans.

I do think that we do deserve more than what we got this year. We deserved to see the players who are going to be on the team longterm more.

So who is going to be the NBA's Rookie of the Year for 2014? Evan Dunlap of our sister blog the Pinstriped Post did a neat recap of what #TheStarters had to say about it:

Following the Orlando Magic's loss to the Utah Jazz on Saturday, The Starters crew took to the airwaves Monday to break down the Rookie of the Year race between Magic guard Victor Oladipo, Jazz point guard Trey Burke, and Philadelphia 76ers point guard Michael Carter-Williams.

Leigh Ellis and Tas Melas agree that Burke ought to earn the award despite his missing the Jazz's first 12 games due to injury. "I think he's going to make the best pro," Melas says, a point with which Ellis agrees.

Of course, those are just two of the four people voting, and it mentions only one of the three major candidates for the award. You need to read the rest of Evan's post here, he actually writes like an actual newsman. Unlike me. Who writes like someone who only had to write lab reports and has a brain tumor.

For the record, I want Trey Burke to win. That's not a huge stretch of the imagination for a Utah Jazz blogger. I did make this image that I rarely use because I don't have enough time to write Rookie of the Year race posts. (Maybe I should do a few more posts on this subject though.) 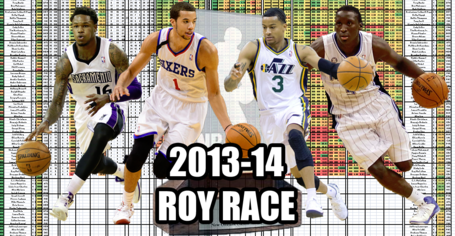 Are the bigs getting enough shots? What do you guys think?

I think I miss this type of ball.

Rudy Gobert is still a thing. Sure, he has played in only 38 of 71 games so far in his rookie year. BUT! BUTT! BUTTT! He is playing in games again, period. Rudy played in five games during January. Then played in nine games during February. And so far in March has played in seven games! He's playing in games, but his minutes are all over the place. After playing 131 minutes in November, he played only 28 in December, and 63 in January. February had him playing 119, and March, in two less games so far, has seen him play only 27 minutes. Which is hilarious as in the first game of the season, in October, Rudy played 23 minutes. You may remember that game as the game he came in off the bench against the Thunder and had 7 rebounds and looked like he could be a rotation player for this team.

We miss ya Rudy.

So he has played in 38 games and 391 total minutes so far with 86.59% of the season complete. If you fast forward at that normative rate this means he'll finish with 44  games played, and 452 minutes for the season. Who are the other NBA players who played between 450-600 minutes in their rookie seasons?

Some of the names that pop out are 3rd and 2nd string centers. A few times you get some players who can occasionally start for part of their careers like Brad Miller and Todd McCulloch. At the same time, you do get a much higher frequency for players like Andrew Lang and Mike Sweetney.

Developmentally I think bigmen come into the NBA with the fewest number of skills. If Rudy is going to elevate past his current level of playing time and/or production he's going to have to improve his skills.

And don't get me started on Ian Clark ... he's on that Quincy Lewis, Morris Almond, Kevin Murphy development plan of sitting for so long that when you're finally in the game you are ravenous and try to shoot every single time you're on the court.