The Downbeat - The "Double Memo" Edition

Who is the best bigman in Jazz history? Who is a MIP candidate? Who should we still watch in the NCAA Tournament?

Share All sharing options for: The Downbeat - The "Double Memo" Edition

Let's be real. Mehmet Okur is one of the best Utah Jazz players of all time. And it's easy to argue that he was our best center ever. Yes, he only went as far as the Western Conference Finals once, but that was also the case for Mark Eaton. Greg Ostertag was a part of two NBA Finals teams, but let's also be real: he wasn't the guy taking them there. Memo didn't block a ton of shots and was never Defensive player of the year, while Mark Eaton did it twice. But Memo still played Yao Ming in single coverage in the playoffs and kept him to -3.0 ppg from Yao's season average against the Jazz there. He was also much more capable in the pick and roll than Big Mark ever was -- bum rushing Tracy McGrady in Game 7 countless times.

One of the best things about Memo is that his nearly unique talents allowed Jerry Sloan to maintain his amazing offense despite NBA rules changes. Sloan's playbook would look awful against a zone defense, and looked unbeatable in the years of those illegal defense rules. The years of posting up a power forward while the center waited at the three point line (and taking a defender with him) were ending -- until Memo came along.

His three point range was a force multiplier for Jerry Sloan. And with Memo on the court it was the first time many Jazz teams were playing 5 on 5 on offense and on defense.

Since then we've had Al Jefferson in the middle for us, and he pretty much one-manned the offense for the Jazz. But he did so while complicating things for the rest of the teams. Guys who loved that left corner three (Marvin Williams) couldn't take it. Guys who lived in the paint had to develop outside shots (Paul Millsap, Josh Howard). Guards who drove had to sublimate their game for him (Devin Harris).

Big Al is a great guy, but Memo came into the team, improved the coach's playbook, and fit like a glove with the other players. Memo could also play hurt, make clutch shots, and was tough. (Who remembers him almost ending Juwan Howard's career a few years back?)

If you add it up, few people did as much as he did in a Jazz uni at the five spot. If only he didn't give 110% every game he may have been healthier at the end of the season and not injured for the playoffs. But if he half-arsed it he wouldn't have been our Money Man.

We love you Memo!

Wait, so who are the best Jazz bigmen ever? Well, we know it's Karl Malone and Kyrylo Fesenko. But more specifically what if you got all the bigs who played at least 200 games for the franchise, and listed them? Don't worry, I did it for you.

I did have to fill in some of the cracks with people like Benoit and Keefe, but they played more like PFs than SFs. If you remove all the guys who aren't primarily centers, and did not play at least 20.00 mpg you get this list.

See how high Memo is here? If you add in the fact that he fit like a glove for our team and defended better than Big Al on pick and rolls (didn't block as much) while hitting "real" clutch shots like game winning threes it's not hard to see why Memo is our best center in franchise history. (I will say that time has really helped us forget how awful Mark Eaton and his 45.8 fg% were on offense.) Of note is also how efficient Kanter is on the floor. He's 9th best out of the 25 person list, and still so young.

Have you been following the whole March Madness stuff? I have, but only so far as to watch the players who could be draft picks for us. There are only eight teams left: Arizona, UConn, Florida, Kentucky, Michigan, Michigan St, Wisconsin -- and the Cinderella team Dayton. The remain players left to watch are:

Other potential guys who could get drafted:

There are 11 other players on Top 100 lists that are still playing, but really, we're not seeing anything we really like at this stage. Right? The players we like / love are all already out of the tournament. At least that's how I see it. Still, this is an opportunity to learn more about these guys. We know the Utah Jazz like to draft guys who lose in the NCAA Championship game (Deron Williams, Gordon Hayward, Trey Burke). One of these guys could be there!

NBA.com 's John Schuhmann wrote a post on possible MIP Candidates. He goes over a number of statistical lists that chart the positive change in production (be it through efficiency, or PIE, or whatever.) Schuh features a few players in this article: Marco Belinelli (Spurs); DeMarcus Cousins (Kings); Markieff Morris (Suns); and Lance Stephenson (Pacers). Our own Alec Burks is named only once in the entire article ... and at that at the end of a table showing the biggest PIE increases. 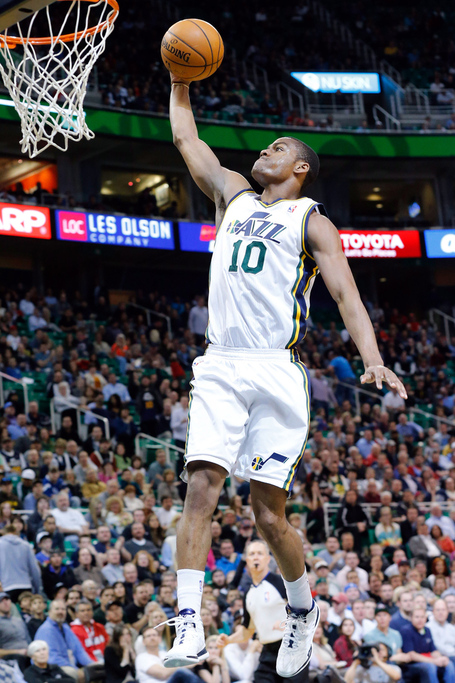 I find it interesting that in a "no need for wins" year after deciding "not to skip steps", and focus on development, we see only one Jazz player in an NBA.com article about improvement. Favors, Kanter, Hayward, and Burks were all lotto picks and finally getting a chance to start. Burks doesn't start, but he's the guy who is at least statistically notable here. The guy who is starting at SF (let's be real, Alec could play SF) is Richard Jefferson. Jefferson receives as many mentions in this article as Alec does, with RJ being last on the short list for largest Total Eff difference.

That's the kind of season we're having. By the metrics that people at NBA.com use, this season the C4 are improving no better than the over the hill vets on the team are.

Someone vandalized the wiki page for Tyrone Corbin. That's not cool. I'm not going to tell you what they did, but I will link to the 'user' so you can all do the right thing, and report that person. He's not our favorite guy, but he's still our head coach. And still a member of the Utah Jazz family. And as a result, he deserves better.

Also, he still needs to do this job, which includes interacting with the media.