Looking at the Jazz history in New York; the Jordan Rules; what Trey Burke has been up to this trip; NBA records; and of course, this year's Draft Class.

Share All sharing options for: The Downbeat #1295 - The "Knicks, Bulls, and Jazz on NBC" Edition 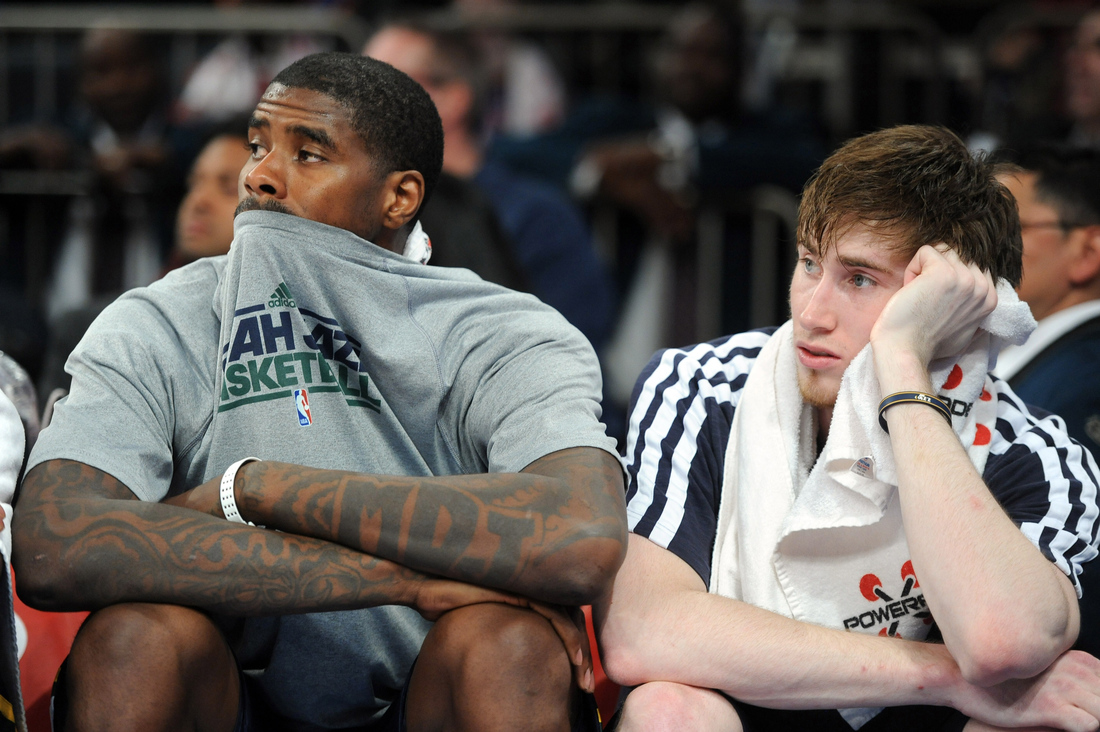 One of the wins was from that magical Jerry Sloan "shoulda-been-Coach-of-the-Year" year where he guided these misfits to a 42-40 record in the western conference back in 2003-04. And the most recent win in NYC was back when we had the whole band together with Deron Williams, Carlos Boozer, Mehmet Okur, Andrei Kirilenko, Paul Millsap, Wesley Matthews, Kyle Korver, and Kyrylo Fesenko. In the last decade we're 1-9 there. Winning in NY isn't something we've had a lot of historically, or recently. We owned them back in the Stockton-to-Malone era which is why Jazz fans felt confident that they would have won the title if only we could have gotten past the Houston Rockets or San Antonio Spurs in those precious non- Michael Jordan / Chicago Bulls years.

Last week we talked about technical fouls. Techs can come from a lot of things, and let's remember that a tech isn't the same thing as a flagrant foul -- but it can be an indicator of passion for the game. There's no relationship between showing passion for the game (as seen in technical fouls) and winning. Some guys do and win, and some do and don't. The Chicago Bulls have a great player in Joakim Noah who does. And the Sacramento Kings have a guy playing at the same position on the floor in DeMarcus Cousins who doesn't. I guess I'm just a dinosaur though. The game has moved beyond being a full of rivalries, passions, and players who didn't mind doing the dirty work. Heck, today's power forward position is just guys taking jumpers outside of the paint now -- and Blake Griffin. Crazy.

Anyway, for today's trip down revisionist memory lane we look at this amazing find by Dan Devine from a few days ago. Thanks to Ball Don't Lie for doing such a great job, and thanks to the Detroit Pistons web team for making this video:

I can't say I'm against teams trying to muck-up the game a bit in order to limit the talent disparity at times. I guess Detroit got away with it because they were also a good, winning club that had a mentality for playing defense. This is somewhat seen today with the Indiana Pacers -- usually guys like Roy Hibbert can get away with fouls because of the generalized idea of how good a defender he is. This team mentality and generally accepted quality (e.g. Bad Boys played physical defense, Pacers play physical defense without fouling) is super important.

I don't know what the impression of the Jazz are right now. Our team doesn't have a culture. We used to. We used to be a great team on offense that executed with precision and played hard, defense. That transformed into an offensive club that fouled a lot. And now today we're a dumpster fire that fouls a lot. Years ago Mogadishu used to be a center for commerce and culture. And right now it seems like the generalized impression of our franchise is that they play like Somalian fishermen being bossed around by Somalian warlords.

I'm interested in the Jazz getting a reputation as a defensive club. There's length and size there with Derrick Favors, Enes Kanter, Rudy Gobert, and Jeremy Evans. There's athleticism at the wings with Alec Burks, and Gordon Hayward. We don't have that pest of a defensive point guard just yet -- but it may all just be a moot point because the Jazz does not have that rep, and the refs will not let us get away with as much as the teams with that rep do have.

But it has to start with playing defensive guys and utilizing a strategy to actually defend them. Right now high scorers circle the calendar for when Utah comes to town. Carmelo Anthony, Kyrie Irving, John Wall, and others routinely destroy us. Bench guys get hot too -- Ersan Ilyasova just had his way with us.

Former Rookie of the Year candidate Trey Burke has had a pretty tough road trip.

Overall it's not been too pretty save for that good game against Indy. Tonight he faces of against actual Rookie of the Year Candidate -- Michael Carter-Williams. It will be Trey's 6th game in 9 nights, but if he comes out and dominates then he may get some more votes. As it stands though, I think Trey had a chance to be #2, and right now may only get enough votes to be #4 or #5 when all is said and done.

Kyle Korver 's streak of 127 games with a made three ended earlier this week.

That sucks for the Atlanta Hawks who have been on a brutal road trip, and facing tons of injuries. What streaks do you think our current players are capable of? My money is on John Lucas III 's streak of saving up his per diem on the road for his Roth IRA. More seriously though, I think we could get something like Derrick Favors with a blocks streak (I hope). Or maybe an Alec Burks not starting streak if we retain Tyrone Corbin. (Self burn)

Also, lots of videos today Amar. Is this what we're doing now?

How well do you know Marcus Smart, Noah Vonleh, Gary Harris, Aaron Gordon, Rodney Hood, Tyler Ennis, Dario Saric, Jerami Grant, Doug McDermott, and James Young? You're going to get to know them pretty well by the time the NBA Draft rolls around. These are the 10 players that are ranked #6-#15 according to their current consensus draft prospect rankings. (Something I do every year, and includes the rankings from places like ESPN, DraftExpress, NBA Draft.net, NBA Draft Insider, CBS, and countless others...) March Madness hasn't started yet -- but this year Utah Jazz fans are going to get a chance to learn more about these guys before the madness sets in.

Why did I pick these guys? Well, it's easy. They're going to be the ones fighting the hardest (well, the ones playing that is -- Dario doesn't play here) to make their mark. They have the most to gain. And these are the guys our front office is going to be looking at the hardest as well, I think.

They've been scouting Joel Embiid, Andrew Wiggins, Jabari Parker, Julius Randle, and Dante Exum for a few years now. And so have we. Now it's time for these other guys to be under the microscope.