Share All sharing options for: The Downbeat #1403 -- The "How to finish free agency" Edition

So, for our Utah Jazz the summer league starts today. The first game for our squad is the nightcap: Utah Jazz @ Philadelphia 76ers at 8:30 PM MT. The game will be on NBA TV in HD. It will also be available online by Summer League Pass. And both KJZZ 14 (TV) and 1280 The Zone (Radio) will be broadcasting the game -- and all three games the Jazz will play in the qualification round of the Las Vegas Tournament.

The Jazz made some cuts, and the roster is down to 12 people now. I like our team, but from what we've seen so far from Philly this summer league, they aren't going to roll over. Let's remember, the games in Orlando never counted for anything. In Vegas if you win you move on. And if you move on that means you get more practice, more games, and more data for the players. And the players get more opportunities to showcase their qualities on the floor. It is a win-win thing for organizations and players to succeed in Vegas.

Because, well, if you lose then you spend all this money just to play in three games (+2 "playoffs").

And last night Philly demolished the Memphis Grizzlies 91-75. And they did it with Nerlens Noel sitting the game out. (Noel averaged 12.25 ppg, 5.75 rpg, 3.00 bpg, 2.25 spg, and 1.50 apg in 24.75 mpg down in Orlando) The Sixers were led by Hollis Thompson, who finished with 21 points, 6 rebounds, 3 steals, and 3 assists. Ronald Roberts Jr. added 12 points and 11 rebounds to the cause. Aaron Craft and Pierre Jackson were some of the other DNP-CDs for that game. I expect them all to show up tonight. If Noel plays he is going to be a challenge for Rudy Gobert.

Man, how I have missed writing about this team with the 'fear of losing', instead of accepting it.

I think that is what Jazz fans are going to feel as well.

The other thing to note is that Michael Carter-Williams isn't on Philly's team, so no head to head of Trey Burke or Dante Exum going up against him.

Just because our summer league roster is set doesn't mean that our team is. There are, theoretically, only 3 spots left to fill if the team matches Gordon Hayward (as they suggest they will). Free Agency is still going on and every day the list of available free agents becomes smaller and smaller. Some major dominoes fell yesterday. Everyone knows about LeBron James, but last night Vince Carter and Kent Bazemore got off the list. If you want wing depth, it would be prudent to move sooner rather than later.

At this point in our teams' roster development it's hard to argue that our wing players (Gordon Hayward and Alec Burks) are guys you need to upgrade. But compared to the depth at PG and Bigman, wing does need a few warm bodies there. Rodney Hood isn't going to light it up every night.

Much like the problem with the third sting point guard, you kind of want a player here who has experience but is not a huge risk to monopolize a lot of the minutes. Who really fits that bill, today? I guess Ray Allen fits the bill, but he's in "play for a contender" mode right now. So fat chance. Richard Hamilton is available, but I don't think I'd want his personality on the team. He has grumbled about role before. Mickael Pietrus is also available, not very talented, but French. So, uh, bien? Some Jazz fans have floated the idea of a Luol Deng, but I've never been a fan of his game. He plays a lot of minutes, isn't spectacular, but well, he's a Dukie -- so there's that. When it comes to finding that mentor type it sadly does end up being a small group of available and useful players -- where someone like Marvin Williams and Richard Jefferson would at least be open to playing for the team.

And you can imagine how that makes me feel.

Personally, I'd throw a contract at Andres Nocioni. He plays with some toughness (like some of the other guys from Argentina), has always been a three point maker, and doesn't shy away from contact. He's also 34 years old now, and knows he's not going to be a guy who should be penciled in for a lot of minutes. With CAJ last season he averaged 14.30 ppg, 5.50 rpg, 1.52 apg, 1.00 bpg, and 0.67 spg, while making 43.3% of his shots from downtown. He is being courted by a number of NBA teams, and Real Madrid too. But "it's not a done deal," is what I hear about that.

I'm cool with finishing up our roster with Chauncey Billups, Andres Nocioni, and Ian Clark. But that's just me.

[CORRECTION 2: Noce just signed w Real Madrid, and that news trickled down to the USA after I posted this. See comments section.]

I don't know if this was suggested to him from his brand managers or not, but this tweet from Dante is hilarious when you juxtapose it to his pre-draft TV commercials for Footlocker / Adidas.

Actually got some real fan mail along with my electrical bills... #LifeChangesAfterTheDraft pic.twitter.com/k98LrxjGAJ

(Thanks to Moni for finding this -- I don't know how it slipped through my Time line -- VISIT HER SITE!) 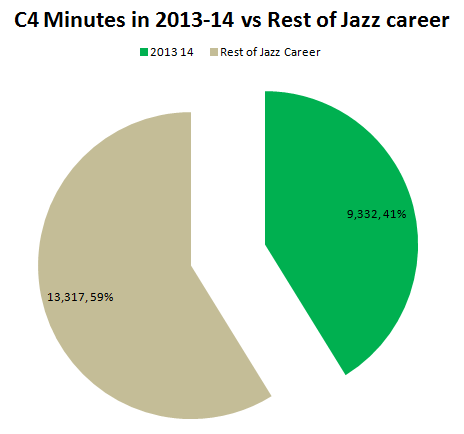 So over 40% of their Jazz mins (regular season + playoffs combined) came last season. That's a nice, gradual, increase. I am going to do this experiment with an actual cookie and actual milk.

Who do you think is sixth on this list? Al Jefferson? Ronnie Brewer? Gordon Hayward? Trey Burke? Or someone else?