velour track suits from the 1970s and summer league talk

Share All sharing options for: The Velour Edition - The Downbeat - #1409

So, the Jazz's [summer league] playoff run is over (recap). It was a nice little #playoffpush, but just like in "real life," the San Antonio Spurs will be moving on and the Utah Jazz will be going home -- as soon as they finish playing their consolation game on Saturday. It was definitely fun while it lasted, and the summer league ends with a new phrase, "playing with the pass," having achieved permanent status in the Jazz lexicon.

A week or so ago, Basketball John (@5kl) came across an amazing set of 1970s Jazz warmups (still with tags on) being sold on Etsy. Our very own Diana jumped on it, and ta-da! Here it is in all its glory: 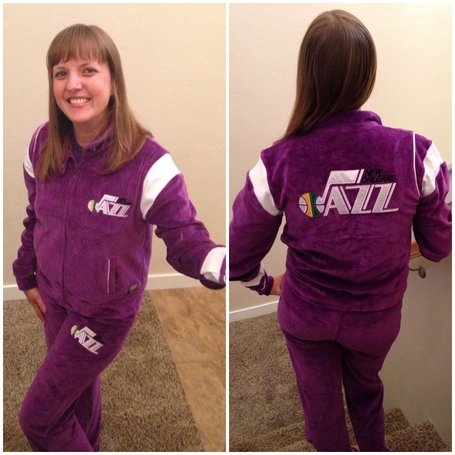 So I guess Trey Burke and Danté Exum are the new Derrick Favors and Enes Kanter, i.e. the new "can they play together" tandem. Based on what you saw in summer league, does it seem like they can?

Who would you like to see as the third point guard on the team when training camp starts? --John Lucas III? --Earl Watson? --Jamaal Tinsley? --Ronnie Price? (good locker room guy, hates the Lakers, can dunk on Carlos Boozer when the Jazz play the Lakers) --Raul Neto? (Three young point guards? The more the merrier!) --A Stockton?