NBA Summer League 2014: End of Vegas for the Dante Exum and the Jazz, looking forward to the FIBA world cup

The End of Vegas, Ian Clark's development, getting snubbed, the start of FIBA, and #STEVEHOLT !

Share All sharing options for: NBA Summer League 2014: End of Vegas for the Dante Exum and the Jazz, looking forward to the FIBA world cup

So, sadly, the Las Vegas Summer league is over for the Utah Jazz for this year. It was the first year for the team to be in it, and frankly the team was stacked with what we think is actual NBA talent in Trey Burke, Dante Exum, Rodney Hood, Rudy Gobert, Malcolm Thomas, and Ian Clark. Because the team had so many NBA-capable players on it I feel like playing in just the minimum 5 games is a disappointment. This just isn't a "my perception vs reality" thing either; the Jazz finished the prelim round +30 in +/-, and won eight of the 16 quarters they played in. Their efforts were rewarded with a #5 seed out of the 24 teams playing in the LVSL 2014. Despite their struggles from the three point line and with turn overs this team was brought together to do more than just get bounced after securing a first round bye.

Man, it is refreshing to be slightly miffed that our team didn't WIN enough games.

Overall I felt like the competition was better than what you'd get in the Orlando Summer league and I am happy the Jazz 'got over it' and finally joined this league. I think that in Orlando there's no impetus for trying to win. It's a perfect league if you are trying to get your 3rd string point guard (note: not an NBA 3rd stringer, but a 3rd stringer on a team that is made up of rookies, NBA-DL guys, and people from European 2nd and 3rd leagues) plenty of burn. In Vegas it was all about playing your best talent today. That is something I support.

And I hope we see the Jazz do this during the season. Play your best talent now, and not hold them back because of some seniority system that made more sense back when everyone went to four years of college.

Beyond winning, Vegas helped us prove or disprove a few things. I think that Erik Murphy is a good basketball player. He just didn't show it in games. The fact that he's still someone who gets on the roster of teams suggests to me that he is probably better than he has shown. In his one game with extended minutes he did have a 17 and 9 game, complete with a three. That said, he was significantly eclipsed by the in-game production of Rudy Gobert, Malcolm Thomas, and Aussie garbage man Brock Motum. For as much as I believe Murphy is a good basketball player, he just wasn't good enough to be AT BEST the fourth best PF/C on this summer league team. It should make it easier not to guarantee his $816,482 for next year. I'd still offer him up an invite to training camp if he's available though.

We learned more than just that, but I will leave it to our expert in the field to break it down more -- Peter.

And if you STILL want to watch Vegas action, you can. Round three starts tonight with four games: ATL vs HOU; SAC vs CHI; CHA vs NYK; and SAS vs WAS. Wow, there are only three West teams still in it. This is like the opposite of the actual NBA standings, ha ha!

Speaking of Vegas, we really need to talk about Ian Clark. Now seems like an appropriate time to figure out if he has gotten any better in one whole year of his life. If you don't remember, he came on the scene in Vegas last year as an undrafted rookie. He set that league on fire, and with the ball in his hands, he led his team to the championship. He won the MVP of the tournament, and was VERY quickly snatched up by Dennis Lindsey as a free agent. Clark has the same contract as Murphy, is not guaranteed right now, but would cost the Jazz only $816,482 to retain.

Kirk Henderson (of a billion places, like SB Nation's Mavs Moneyball, and now of FanSided's Hardwood Paroxysm) was in Vegas as well and got a chance to speak with Clark. The Jazz PR guys were even surprised that someone wanted to talk with him. (I guess that shows you that what National observers are interested in aren't specifically the same cookie cutter things the Jazz PR expect from the media they interact with under the Utah bubble.)

Kirk (follow him on twitter @KirkSeriousFace !) discusses Clark's journey, his rookie season, his time in the NBA-DL, and compares it to the progress of fellow 2013 point guard Isaiah Canaan. Read it here. For you lazies out there, he's a really long excerpt.

Clark didn't see playing time in Utah due to the players in front of him (Trey Burke and Alec Burks) and because Tyrone Corbin insisted on playing John Lucas III . With a 50 game D-League season, it seems odd for Clark to only spend eight games in Bakersfield. Though, perhaps the Jazz did not see extended value in sending Clark to Bakersfield. After all, the Jam are an independently owned D-League team, meaning more than one NBA franchise can send players to the team. Last year, five NBA teams used the Jam for developmental stints. Most companies in the non-basketball world probably wouldn't be comfortable sending their employees to an independent subsidiary for an extended period of time to learn how to be better in-house employees.

While with the Jam, the Jazz had no control over what system Clark was taught. Essentially, Clark and Gobert were sent to play basketball, stay in shape, and attempt to practice whatever guidelines Jazz officials laid out for them.

Comparing Clark's season with the path of former college rival Isaiah Canaan is a bit maddening, but both ended up in less than ideal situations. Canaan was drafted as a third string point guard and ended up fourth on the depth chart at certain points of the season. Houston owns their D-League affiliate and Canaan saw plenty of opportunities for growth. Canaan followed up a modest season with a strong Summer League and may have locked up the second string point guard spot.

Clark also found himself in a positional logjam, but instead of getting chances to play he practiced with the team and sat on the bench. Clark has not had the same chance to develop.

Yeah, this is a good read. It goes into much more background for the whole Clark/Canaan thing and goes into the changing relationship between the NBA and the NBA-DL.

I think we all do like Clark. He is a legit shooter and has a bit of a floor game where he can score at the ranges we have difficultly with (specifically from 6 to 10 feet from the basket). Alec Burks is bigger and stronger, and can finish with contact or avoid it on his drives. Rodney Hood is taller still, and has a great pump fake, and reverse, half-pivot move to create space on a jumper in the paint. But Clark is still the guy you can't discount. If he was two inches taller we wouldn't even be having this discussion, so this is the reverse height-ism thing that is facing Dante Exum (trying him at SG because he's 6'6, even though everything about his game screams PG).

I also believe, fully, that if you look at the year-to-year progress of Clark that his rookie year taught him a lot of things as a young man, but he didn't really get better as a basketball player. This is, effectively that "Is our children learning" moment. Last year I don't think many of our younger guys did.

The NBA store just released some cool, semi-retro Caricature tank tops of NBA legends for you all to buy. Many of the guys they picked where players who were popular in the 80s and 90s, many people from the 1984, 1985, and 1986 drafts. There are some late 90s guys and some late 70s guys too. But it's mainly just a 80s/90s revival. 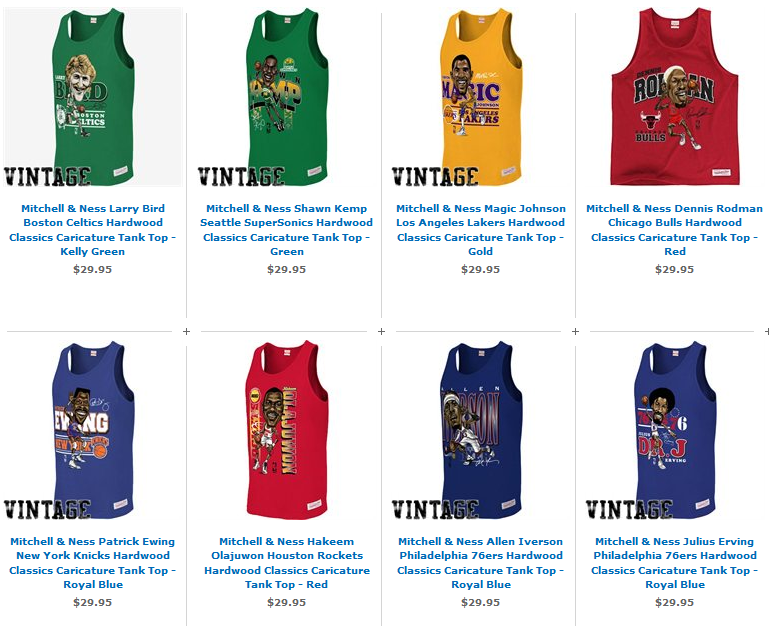 Of course, you know that I'm about to tell you that out of all the guys they picked from, zero were from the Utah Jazz.

Speaking of snubs, EliteDaily.com put out the starting line-ups if players pulled a LeBron James , and went home to play for their local NBA clubs. They charted this out for 28 NBA clubs, one of which isn't even an NBA club right now (they have both OKC and Seattle). I don't need to tell you that Utah wasn't picked to diagram.

Check out their site for the full reasoning, and for a view of the 28 teams involved.

And because they didn't do one for Utah . . . I had to. Unfortunately, because there have only been 19 guys born in Utah who have played in the NBA, I had to cheat and use a bunch of guys who aren't even active players anymore:

Yeah, that's not a very scary team. And it pales in comparison to some of the squads from other area codes made up of just active players. But you know what? I'd like to see this Utah team play. It could be fun! We saw the team start three small forwards last year. It's obvious that I'm into weird stuff by now.

Just because Vegas is over doesn't mean that basketball is. At the end of August we get the FIBA World Cup 2014! It's like that soccer World Cup thingy, but with fewer teams, and more scoring! Per Wiki, here are the teams involved:

Jazz fans will have Dante Exum (AUS) to root for. Enes Kanter (TUR) is not going to be playing, but he made his team. And Gordon Hayward (USA), Raul Neto (BRA) , and Rudy Gobert (FRA) all are going to be or already are in the camps to pick out their final roster.

How is Russia not in this tournament?

Anyway, it is going to be fun for us to all watch, and over-analyze.

We don't have enough of him for Fesenko Fridays anymore . . . but you gotta love Kyrylo Fesenko .

Fesenko is chillin on the end of the bench and REALLY looks like Steve Holt from "Arrested Development" pic.twitter.com/1tNaRhoCSO

Fes re-tweeted this. He wasn't even @ mentioned in it. He's just searching for his name on twitter now.