The I Scream, You Scream, We All Scream for Quin Snyder Edition - The Downbeat - #1421

Share All sharing options for: The I Scream, You Scream, We All Scream for Quin Snyder Edition - The Downbeat - #1421

With the news of Dick Bavetta's retirement, here's a story shared by Karl Malone two and a half years ago (yes, in that infamous interview that sent Greg Miller a-bloggin'):

We’re playing in Spokane, Washington against the Seattle Supersonics [during the '98-'99 preseason]. [John] Stockton and myself as captains, Gary Payton as a captain. Dick Bavetta was in the center talking to Stock and I…Gary Payton left. [Bavetta] said, “Karl, stop. Come here a second.” He said, “Guys, I have had the worst summer I’ve had in my life that I [waved off Howard Eisley's 3-pointer in Game 6 of the '98 NBA Finals] in that game.” He said, “My summer have been shit, uh, hell.” Imma tell you that happened, and it came from Dick Bavetta. Now, if somebody say it didn’t happen, they lying and they bullshitting. That’s real. But, but, well, I said it already. Shit.

At least Bavetta was sorry. I guess. Hmph. That blacking out words thing we do in the comment section won't work in the post itself, so I whited out the letters. Select the text or Ctrl-A to see the full text if you can't figure it out.

Favors was also asked about how he stays motivated, and his response was he reads all the bad stuff people write about him. @BYUfootballguy has a suggestion out of love for the Jazz:

@monilogue This makes me want to write bad stuff about him if it means it fuels him to be better. I love the Jazz that much. 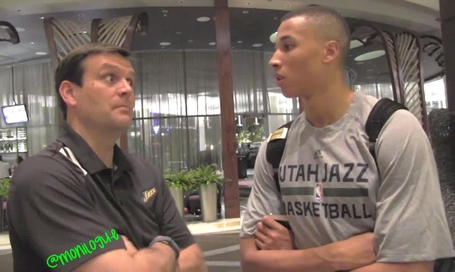 Andrei Kirilenko and a cheetah.

Amar linked to my transcription of Randy Rigby's most recent interview in yesterday's DB. (Thanks, Amar!) In that interview, Rigby was asked about the worst jobs he's ever had, and talked about how his early work experience convinced him that he had to get an education so he could use his brain and not his body to earn money. What's the worst job you ever had?