Mehmet Okur is back in the fold.

Mehmet Okur has been hired by the Utah Jazz to be a consultant according to Jody Genessey via Randy Rigby's radio interview.

In English, Mehmet Okur will act as a consultant for the Utah Jazz, president Randy Rigby announced on the team's radio station today.

I don't know what consultants specifically do for the Utah Jazz. I know in the education world, it's whatever the district wants you to do, or tells you to do. Here are some initial questions I have about the position. How much time will he spend in Utah? What will his specific duties/responsibilities be? Will he be connected with any specific players (Kanter)? Or groups of player (Big Man/Stretch4 coach)?  Is there a specific reason this hire didn't earlier? Is there a possibility he works overseas as a scout or contact there for European players? Obviously, I am full of more questions than answers. Below, is a video to remind everyone of Memo's unique skill set.

Gordon Hayward has the opportunity to do a lot of things this year. Many of those opportunities will be on the court: with a new coach, a new offense, and a new frame of mind. I hope he proves people wrong, and by people I include myself.  I hope his shot has improved, an improvement that will help in the other areas of his offensive game. If he can be an outside threat, or even appear to be an outside threat, it will allow him to penetrate more. The new offense will/should allow him to get more shots off of pics, curls and cuts to the basket. He shouldn't have to create his own shot as much this year. I say shouldn't based on the offense that we saw in Summer League and the scrimmage.  I personally feel/hope he has a bounce back year and returns to his 12-13 numbers and proves that last year will be a blip on the radar. What do you want to see out of Gordon Hayward this year. Others, see him going in the wrong direction.

Interesting quote and graphic from the above article.

Everything is trending up for Favors. He is becoming a better contributor in terms of both quantity and quality.

His numbers read like those of a young player who needed some seasoning on this stage. Go back through his old scouting reports, and you'll find some variation of that description. Favors has always been a long-term investment, and the Jazz are just starting to see the type of return he can offer.

Based off of Favors trajectory (see above) Favors should be slightly better this year than last. Even if defenses focus on him in the paint with double teams and shadows, his passing skills and court awareness have gotten better each year. I expect them to improve again this year. I hope he has pushed his jump shot out to 15-18 feet. This will help both the pick and roll game as well as clear space for the guards to get to the basket.

SI.com top 100 players of 2015 Do you agree with the following two placements ? 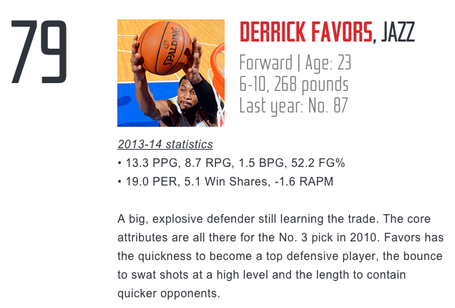 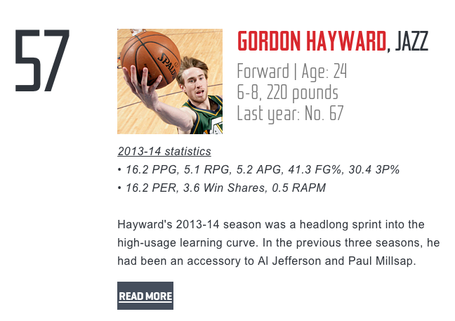 Open Poll: What is your favorite Mehmet Okur moment either on or off the court?