Utah Jazz Downbeat #1462: Will Derrick Favors be the next Kwame Brown?

How big is Rudy Gobert? How bad will Derrick Favors be? Do you remember Jazz history? And yes, we're on Facebook. Like us, you jerks!

Share All sharing options for: Utah Jazz Downbeat #1462: Will Derrick Favors be the next Kwame Brown?

SLC Dunk has a Facebook page. Go there. Like us. We're going to be bringing the heat there this season. You will be carpet bombed with content on that social media site from all of the SLC Dunkers. Also get sneak peeks for what's happening on the site, and more 'after hours' discussion.

Utah Jazz media day is going to be this Monday, so be ready for a lot of cool social media content that isn't entirely blog worthy, but Facebook friendly. Like the David Locke Locked on Sports interview drinking game.

Do you remember the good old days, back when the Utah Jazz traded away Blue Edwards to the Milwaukee Bucks for Jay Humphries and Larry Krystkowiak? Be part of history by bidding on this reversible practice jersey!

Dude, no holes or stains. More seriously though, I liked Humphries' game back when he was with the Bucks, and felt as thought he would FINALLY be that good back-up point guard to give John Stockton a breather. I wasn't crazy about his days with the Phoenix Suns, but maybe that's just because I felt like Phoenix was one of our rivals? But Hump was very legit, and then he became all inefficient and not helpful with the Jazz. It got so bad that two and a half years later the Jazz traded him away again . . . for Blue Edwards.

. . . speaking of being part of history, here some guy uploads a video of the Seattle Super Sonics against the Utah Jazz, in NBA Live 2004. Also, please note that he includes himself as a created player for Seattle, and adds Yao Ming to their frontcourt.

To be fair, when I was a kid I probably would have done the same thing. In NBA Live '95 I added Dikembe Mutombo to the Jazz team. Seriously, that's one horrible non-attempt at getting a free agent if there ever was one. Deke became a free agent in the summer of 1996, and the Jazz really *really* should have thrown the kitchen sink to get him. Instead he went to the Atlanta Hawks, who did manage to win 56 games and get to the second round of the Eastern playoffs that year. The Jazz, on the other hand, won 64 games and went to the NBA Finals. Had the Jazz somehow gotten Mutombo as an unrestrictred free agent in the summer of '96 we may have seen a completely different course of history.

Also, it is still more likely than Yao Ming on the Sonics going up against a Keon Clark led Jazz team. But that's really on Keon more than anyone else.

Do you guys ever visit Sports Illustrated's FanSided blogs? A few days ago at HoopsHabit D'Joumbarey A. Moreau broke it all down and asks if Derrick Favors is the next Kwame Brown. Brilliant work. No really. It's a positive piece that has an eye grabbing headline. Solid points are made that other bigs from the same draft class have NBA niches already (DeMarcus Cousins is an All-Around talent, Larry Sanders great on defense, Greg Monroe is a legit back to the basket scorer, etc). Favors does not display any one generalized talent (besides, I guess, having played his entire career under bad coaches). Here's an excerpt:

What Favors can do though is use his ability to help create one of the best front courts in the NBA with his fellow rim protector center Enes Kanter. The way the Jazz are using Favors though is as an essential role player on a very productive winning team. Though their lineups have not translated into wins yet, the talent is there and they need better coaching (Counting on you, Quin Snyder).

A lot of people see Favors as one of the cornerstones of the franchise but that is something that is hard pressed for my eyes.

Enes Kanter isn't much of a rim protector, but hey, I don't write for FanSided. And I'm not a national writer, I focus on mainly the Western Conference and in that the Jazz. So my eyes may see different things than Mr. Moreau's eyes do. Check it out, it's a good read. And for the record, the article asks questions. Questions that Derrick Favors has to answer with his play on the court. 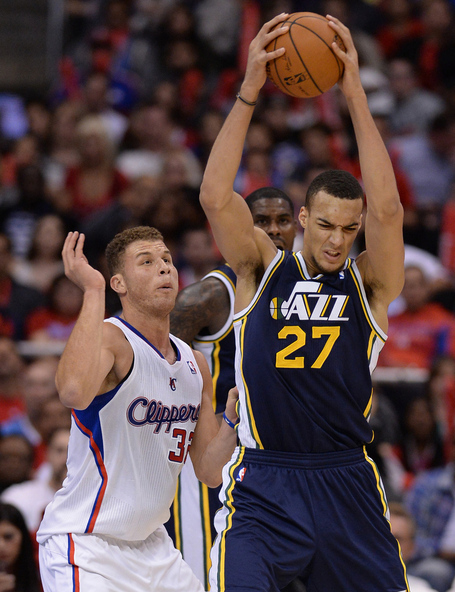 Mychal and I got it first hand when we -- and the rest of the NBA world -- got a chance to see him in person. The previous coaching staff thought he was best suited to anchoring the bench, instead of the paint. As a result, they all aren't working in Utah anymore. And Rudy? After putting in work in the Las Vegas Summer League and the FIBA World Cup it's clear that he's about to blow up. Jonathan Wasserman of Bleacher Report suggests that he is one of a handful of sophomores who could really show up this season.

Rudy Gobert was all over the place for France in this year's FIBA Basketball World Cup-a job that's made easier thanks to that epic 7'8.5" wingspan.

But Gobert has some serious wheels for a 7'2" big man, along with a motor that keeps them spinning.

Though not very polished, he's an easy-bucket machine around the rim. Gobert shot 72.9 percent (16 of 22) from the floor this summer in Spain, with just about all of his makes coming off catch-and-finishes, lobs or putbacks.

His timing looked more on point, which ultimately led to more activity despite his inability to create. In what was a major upset over Spain, he made a legitimate impact in the paint, having pulled in 13 boards to Pau Gasol's eight and Marc Gasol's four.

Defensively, between the on-ball rejections and weak-side challenges, he ultimately helps shrink the size of the rim he's protecting.

Gobert is also coming off a strong Las Vegas Summer League, where he averaged 11.8 points, 9.8 boards, 2.5 blocks on 73.1 percent shooting through four games.

At this point, forget about how raw his offensive game is. Even without any ball skills, he still provides his guards with a high-percentage finishing target, while his physical tools translate to all sorts of defensive disruption.

Yeah, I agree. Click the links to read the full breakdown of the Rudy section, and to scroll through the rest of the Sophs on his list. For me the initial idea of what Gobert was happened to be a guy who specifically went out there to attack the rim. And on defense it was a guy who would try to challenge everything. He was raw, but he was getting his elbow at the rim when trying to block shots from the weakside back at the combine. He's not going to have face up skills at this point, or be able to pass like Ante Tomic, or put the ball on the floor.

Dude has flaws, and some people were more than willing to list them all.

But the bottom line in basketball is that if you have a talented bigman you are only hurting yourself by not trying to make him the best he can be. He's young, physically gifted, and has the right mentality to want to do the things he is supposed to do: get rebounds, finish everything near the rim, and defend the paint. You just need to compare his fire and activity against that of the Bovine proprioception displayed by Greg Ostertag to see that there's something special here.

Rudy needs to play at least 20 mpg this year, and in 75 games. The only thing that can stop him . . . is the bigman rotation set up by the Jazz coaches.