Share All sharing options for: The Fantastic Day to be a Jazz Fan Edition - The Downbeat - #1573

Can you believe he's ours???

Gobert is way ahead of schedule in his development at 22 years old, and today the Jazz look very smart for drafting the 7’1 big man with a 7’8.5 wingspan. Not only has Gobert emerged as Utah’s best center, he has arguably been the best defensive big man in the NBA. If this seems like an exaggeration, consider these numbers: Through December 31, Utah was 27th in the league in per-possession defense (when Gobert averaged just 16.5 minutes in October, 15.8 minutes in November and 21.7 minutes in December). But since February 1 (when Gobert’s minutes significantly increased), the Jazz are the league’s top defensive unit, as Dowsett pointed out in his DPOY article. It’s no coincidence that Utah’s improvement on that end has coincided with Gobert’s increase in minutes. When he’s on the floor, the Jazz’s defensive rating is 99.9 versus 106.9 when he’s off the floor. Gobert leads the NBA in defensive box plus-minus (5.0), points saved per 36 minutes (4.16), block percentage (7.7 percent) and opponents’ field goal percentage at the rim (39 percent). He’s ninth in the NBA in box plus-minus trailing only All-Stars Russell Westbrook, Stephen Curry, James Harden, LeBron James, Chris Paul, Anthony Davis and Damian Lillard. Gobert is third in the NBA in blocks per game (2.3), behind only Anthony Davis (2.8) and Serge Ibaka (2.5). Gobert would likely be first had he started playing more minutes earlier in the season. On the year, he is averaging just 23.5 minutes per game compared to 35.7 minutes for Davis and 33.2 minutes for Ibaka. With 19 games left in the season and Gobert playing 35.8 minutes per night this month, it’s still possible that he’ll pass Davis and Ibaka to lead the NBA in blocks per game. While Gobert has been a beast on the defensive end, he has also been better than expected on offense. He still has a lot of room for improvement obviously, but he’s not the raw liability that many thought he’d be when he was going through the pre-draft process.

On a related note, Gobert was asked in the post-game last night if he notices he's been getting more national attention lately. His response: His goal is to have as many Twitter followers as Joe Ingles within 10 years. :)

Diana with a tweet that made me really laugh out loud last night:

@monilogue it's like harden needs to pull up his bra straps 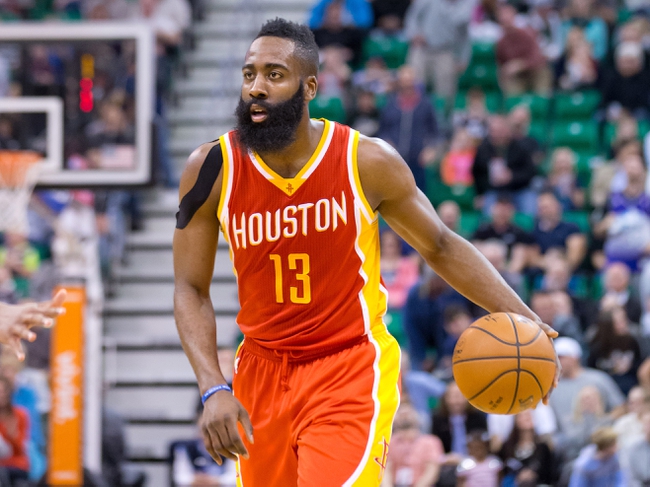 What is your emotional state as a Jazz fan right now?