Share All sharing options for: NBA Free Agency 2015: Utah Jazz need to figure out Grant Jerrett . . . and hopefully will soon

Looking at the logs, we missed a Friday Downbeat, two weeks ago. If you want to blame anyone, and you should, blame me. We get to talk about the Utah Jazz every day, so it's a privilege that I really appreciate. And while we have been doing it somewhat quietly for years, there are going to be a lot more Utah Jazz fans in the future. Even the big name agencies are talking about them now. Look out world! We also look at NBA Kids, discuss community issues, and worry about Grant Jerrett.

ESPN is saying nice things about our team. I'm scared! In specifics, Bradford Doolittle has this to write: (via Basketball John)

Today we're ranking the top young cores across the league using projected three-year WARP. The error bars on these kinds of forecasts are large by nature. For one thing, young players are inherently more difficult to project than veterans. And once you get beyond the coming season, the picture changes in ways that even the best projection model can't foresee.

But we do the best we can with the data available, and try to anticipate aging curves using factors like age, experience, athletic indicators and draft slot. Nevertheless, if a player has a low statistical baseline from whence to grow a projection, it's tough to predict All-Star production.

In the end, the system is a little biased toward players with at least some positive NBA production already under their belts. Still, this is a great way to glimpse the teams strictly through the prism of the young talent that they have accumulated. That's defined here as any player likely to be on the roster who won't yet be 26 by the end of the 2015-16 regular season. For some teams, including our top-ranked club, the good news just keeps getting better. For others, well, you can always just disagree. 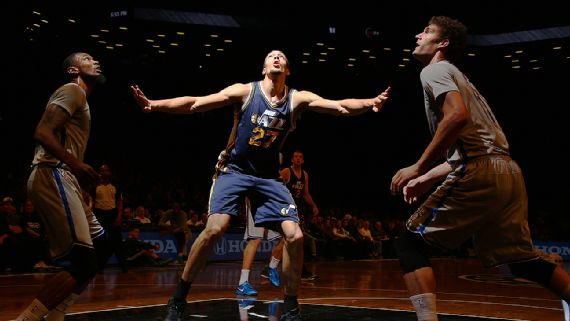 Gobert's amazing second season buoys a young Utah core that is brimming with both talent and depth. Gobert's three-year forecast ranks third among under-26 players. If Exum makes a second-year leap, it's quite possible the Jazz will top these rankings if we revisit them during the season.

This is just the middle of the beginning of the deluge of pro-Jazz articles that we're going to read from national writers. It's been a long time coming. The large periods of the John Stockton / Karl Malone era were mostly avoid by the national media until they were going to the Western Conference Finals -- but then the narrative was "which OTHER team will make a Jazz like jump, and surpass Utah?" Then the Deron Williams / Carlos Boozer era was mostly predicated by long overdue respect for Jerry Sloan. The last few seasons were rightfully lambasted by brave national media types -- but now we've turned the corner. And I think the media has as well.

This is a fun team. A good team. There are some marketable players here. You have dunks, and blocks, and threes. And a young coach in Quin Snyder always is ready to say something smart, and look a little too laid back with his buttons open. It's a nice look. And seeing the media fawn over everything from the short term and long term plan, the development process by the coaches, and the youth / talent matrix of the players . . . it's nice to be popular.

Not just a joke, but I have heard rumors of John Stockton throwing things down in 1992 Dream Team closed door practices. Also, I love how the Kings and Jazz are close franchises now.

I know what you're thinking . . . "I wish SLC Dunk had a full-time podcast again!" I don't have a specifically grand announcement to make, but I will state that all the other Jazz blogs seem to have one if you are interested. Former SLC Dunker Andy Larsen is even on the radio regularly! (And has cool people on as guests all the time!) If you wanted to listen to someone that makes you say "Hmmm, I bet this handsome devil probably looks like Brad Pitt...." then there's really only one option for you. The Jedi and J.E.R.M.S. podcast over at Torn By Sports.

@AllThatAmar Don't know if you listened, but we addressed your question | Jedi & Jerms on the Jazz Episode 27 | http://t.co/rL8srGc2Yq

And I'm not just re-tweeting this because they answered my question. Shut up : )

As for this site, what type of diversity of content types are you most interested in seeing / reading / listening to over here?

This is more opinion more than anything else, but I think it's an interesting group discussion. What do you do about Grant Jerrett? Currently the Utah Jazz have Derrick Favors, Rudy Gobert, Trevor Booker, Trey Lyles, Tibor Pleiss, and Grant Jerrett under contract. (Some places have Grant as a non-guaranteed.) Jack Cooley also has a non-guaranteed contract too, and has one big thing going for him, he's healthy. That's seven players, and Grant appears to be the odd man out. I can see the Jazz signing Cooley to a similar deal as last season, where he stays in Idaho and acts as bigman insurance. He has demonstrated a clear NBA level skill, though he is undersized and less athletic than his opponents at the NBA level.

Grant, we haven't seen much of him. Ever.

Ostensibly, he's a stretch big. But he's still a 2nd rounder. Do we figure that Trey Lyles, a lotto pick, is already ahead of him? Probably. They are both 6'10 and Trey has shown the ability to do more than just shoot when he's on the floor. Both appear to be poor defenders, but at 19, Lyles does look to be the better prospect.

Grant doesn't have Trevor's hustle either. Or Tibor's length and experience. And honestly, Cooley is a natural power forward -- just not a stretch big.

So what do you do? Do you keep Grant on the team, taking up a roster spot? Do you try to trade his very small salary? Or do you just eat it, and move forward? (It's less than a million, and the team is way under the cap.)

I guess I'm the bad guy here and I move forward, saying goodbye to Grant. The team has done that with injured players before (Patrick Christopher). I wouldn't be surprised if they do it again here. It just sucks. He's a young kid who has had some crappy luck. Maybe that, indeed, makes him a Jazzman after all?

I guess the poster boy for poor luck, injuries, and being a discarded Jazzman would be none other than Andrei Kirilenko .

And then he retired. Man. I still can't believe AK-47 retired. Man. I miss you AK. You're still on my NBA 2K MyTeam though . . . and it's still too soon for me to unpack all of my feels. Clearly, dude deserves his jersey retired.