The Arena Upgrade Jazz fans deserve! Also NBA Finals, NBA Draft, and NBA Free Agency news. For real. This is not a drill!

Share All sharing options for: Larry H. Miller Group of Companies to recieve public funding for Arena renovation - The Downbeat #1931

Utah Jazz news on the NBA Draft and NBA Free Agency front. Taking a look at a bittersweet moment in our own history. Predicting the NBA Finals outcome, and of course the biggie, TAXPAYER FUNDING FOR THE WIN!

So.... what's the biggest news right now? Well, I'd have to say that it's the fact that the LHM Group, who owns the Utah Jazz, will be getting some public funding after all. Check all of this from the Deserent News' Jody Genessy:

This is great news, even if the local price tag is "only" $22.7 million (or 18% of the total budget of the Aunt Viv rejuvenation project). From Jody's article:

The Jazz aren't ready to disclose exact details of the project that brings a large smile to the faces of ownership and management — aside from divulging that some technology (e.g. WiFi) and the roof will be improved this offseason.

However, the project's budget has been finalized.

The price tag for the renovation has been set at $125 million, with the vast majority ($102.3 million or 82 percent) being funded by Larry H. Miller Sports & Entertainment.

The remaining $22.7 million (18 percent) will come from public funding if the organization's proposal to Salt Lake City's Redevelopment Agency next Tuesday is approved in that group's monthly meeting.

The Jazz worked with city leaders, including the mayor's office and the Chamber of Commerce, to come up with an economic solution that team officials believe is a win-win for the team and the community.

If given the thumbs-up, the public finding would be delivered via intermittent payments over the course of the next 25 years, perhaps sooner, through the city's Tax Increment Reimbursement mechanism.

This is an incentive program the RDA implemented to promote redevelopment in specific locations around the downtown area, including the lot that's situated next to Stockton and Malone streets on the west side of the city.

The way this Tax Increment Reimbursement program works is simple.

The Jazz currently pay about $1 million per year in property taxes for the Miller-owned Vivint Arena, which sits on city-owned land. If the value of the building increases — and they anticipate it will by a lot — the city will incrementally reimburse the franchise 40 percent of the tax increase. The other 60 percent of the newly created funds will go to the Salt Lake City School District, the city's fund, the Salt Lake County general fund, etc.

Read the article. Read all the other news about this project. I think it is win-win, personally. But I'm not a local tax payer in Utah, so what do I know? Also, the information presented by the DN shows that the LHM Group is paying more than their fair share of the pie when compared to that of other teams in the league.

As a result, I'm going to stop making fun of the team for all the "nickle and dime-ing" they did during John and Karl's career. They are opening up their money pit now and spending on this franchise. From the big things, like these upgrades, to purchasing an NBADL team, to scouting 100s of draft picks a year, and even hosting free agent minicamps.

Speaking of the free agent mini-camp that happened a few days ago, the list of players working out weren't the top level free agents. But that's kind of what we are used to. In 2013 the Jazz worked out 24 guys, and over the next few seasons brought in 27 and 26 guys. This off-season the Jazz brought in a record setting 30 plays. Most of these players are bubble roster players but some of them have retained some time with the Jazz franchise one way or another. Which is kind of what the team has done over time. Of the 105 players brought in only about 25 had previously been brought to Utah for pre-draft work outs.Some of them played for the team in Summer league. And a few hang on long enough to get to training camp, or make the D-League team. Or both. Some of the notable examples are:

Who are the lucky guys this year? Most are entirely unremarkable. One player had played with the Jazz before, back in the 2013 Summer League: Dionte Christmas. Nine others had pre-draft workouts with the team over the 2014 and 2015 off-seasons: C.J. Fair, Chalres Jackson, Dustin Hogue, Gary Bell Jr., Keifer Sykes, Patrick Miller, Royce O'Neale, Tialib Zanna (also a Stampede player), and Trey Zeigler. The only real "almost NBA rotation guy" who showed up this year was Greg Stiemsma. But a few were on my NBA Draft big boards over the last few years, like Adonis Thomas, Brandon Ashley, Jordan Bachynski, and Ra'shad James. There were at least two "Imma do you a favor" invites to this, Gordon Hayward's bro Justin Mavunga was there. As was former Jazzman Tyrone Corbin 's son, Tyrell Corbin (a 6'0 point guard who shot 17% from deep in Montenegro).

I don't know who impressed during this workout, I've kind of been out of it for a while, but I am interested to see if anyone will accept a summer league invite. Motum, Bost, Murry, and Cooley were all nice finds. There could be one more out of this batch.

Speaking of the NBA Draft, the Jazz continue to work out players -- six more today. That would bring the off-season total up to 81 players, from Abdel Nadar to Zach Auguste. To me 81 means that there are a few more workouts left to go through before the NBA Draft (June 23rd, 2016). The year to year increase has gone from 32 players, 30 players, 24 players, 26 players, 91 players, 101 players, and as previously mentioned, 81 players worked out so far. With four draft picks (#12, #42, #52, and #60) the Jazz have to scout everyone. Thankfully they usually already do. The other thing is that they have the figure out if they want to draft and stash some players overseas and roll with some undrafted guys like they usually do. With three second round picks -- and all of them sub 40 -- you may be just tempted to draft the guys you actually like this time around. Or hopefully, consolidate some of them into something more immediately useful.

Fourteen of the 81 players look to be guys who could go in the second round of the NBA Draft. The vast majority are guys who do not look like they will be drafted at all. Heck, 41 of the 81 guys aren't even on any of the main media draft experts Top 100 or Top 150 big boards.

Naturally, you're going to see fewer big name players work out for the Jazz -- who are sitting on #12 right now. Back when the Jazz at a #5 pick there were more people lining up to sweat it out in the mountains for a chance at a big payday. This year the best players who have worked out for the Jazz have been Domantas Sabonis, Denzel Valentin, Demetrius Jackson, Dejounte Murray, and Malachi Richardson. The later few on that list are possible 1st rounders, and if we're looking at the "maybes" then we should also list Thon Maker. But overwhelmingly so far we haven't seen a lot of top level talent.

But again, we're probably going to see 10-20 more players before the draft.

So the point guards are of no consequence in this battle, but we'll see a lot of three on three play. The name players (Webb, Allen, and Greene) are fighting for that #60 spot in the draft.

The best player should be Webb, who is long, athletic, and has three point range.

But Allen and Greene are right there. Greene is probably the best shooter out of this group. I'm not against going with a wing at #60 -- you think an upgrade on Chris Johnson could be found there -- and for dirt cheap.

Whatever Dennis Lindsey and company do, I think they have at least earned our collective trust over the last few drafts. They have shown initiative in trading up for guys they wanted, snagging Trey Burke (#9), Rudy Gobert (#27), and Raul Neto (#46). They have scouted well to know who is the best player at any spot, with their selection of Rodney Hood (#23). And they work out prospects so well that they can see the potential in them that even their college coaches didn't get a chance to explore, like Trey Lyles (#12) and his non-existent NCAA three point shooting -- who is now our face-up modern power forward prototype.

So I'm really okay with what we end up with on draft night.

But it wasn't always like this. There are hits and misses for every team, but some teams really miss big. The Sporting News broke down every team's single greatest miss. And for the Utah Jazz, it's a bittersweet memory for us old guys:

The NBA Draft is really difficult. So we picked every team's single greatest regret. https://t.co/v7w5vhyzmg pic.twitter.com/dbpU7gY2N3 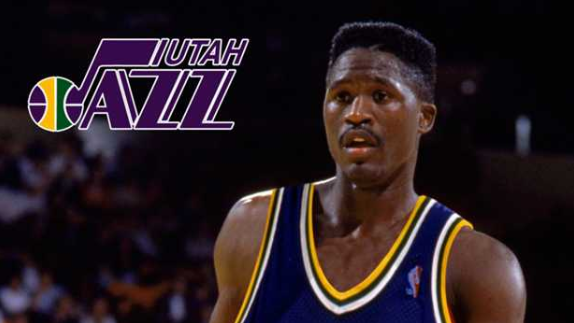 The Jazz took the right player. Then they couldn't afford him. Wilkins went on to be a Hall of Famer and one of the greatest scorers the game has ever seen. So they traded him to the Hawks for aging John Drew and washed-up Freeman Williams. Luckily the Jazz made up for it with two of the greatest picks of all time, John Stockton in 1984 and Karl Malone in 1985.

I do my best to always add Nique to a team with John and Karl as soon as possible in NBA 2K's "MyTeam" mode. That doesn't mean much, though. Of course, the other side of the story is that the Utah Jazz as a franchise may not have even existed to this point in time if not for this trade for cold hard cash (and filler). I still think that people would have shown up and bought tickets to watch 'Nique, Stock, and The Mailman on a team that also had Mark Eaton, Darrell Griffith, and others. Of course, who is to say that the Jazz even pick at #16 and #13 in the 1984 and 1985 drafts if Dominique is on the team?

In order to deflect actual growth and introspection, let's instead laugh at the Dallas Mavericks. Joseph points out that they missed on Charles Barkley in 1984. That's bad. But the next draft they had a chance to come out of the first round with Karl Malone, Joe Dumars, and Terry Porter with their three picks. Instead they ended up with Detlef Schrempf, Bill Wennington, and Uwe Blab. Not quite as great.

It's likely that there is going to be only one more game in the NBA Season, tomorrow, when the Golden State Warriors try to finish off the Cleveland Cavaliers in Ohio. Of course, the Cavs are going to try to win at home to force a Game 7. Who is going to be the MVP of this series?

Okay, RJ probably isn't going to win it. But win or lose, you have to at least respect what LeBron is doing as the primary focal point for a 73 win team's defense. As for the Warriors, SB Nation's Tom Ziller had to address something: