It's the Halfway point for the Utah Jazz season -- and I'm going to go over something cool for each of our players, get read to be Mill-slapped.

Stop me if you've heard this before -- but every season Paul Millsap brings something new to the table. Sap is a throwback, he comes from a mental place where nothing is taken for granted, and you come by success through hard work an honesty. Many people questioned his size on draft night (he fell to the second round, being snatched up with pick #47), but that's only because they failed to rank players by work ethic. He was a garbage man turned into legit spark off the bench / energy guy in his first off-season. In his second off-season he developed a better handle and could take larger players off the dribble. In his third off-season he developed a more diverse offensive game to support the theory that Carlos Boozer could be replaced. In his fourth off-season Paul greatly improved his face up game and midrange shooting and became a starter. In his fifth off-season Sap continued to improve and actually found consistency in his free throw touch, and became a terror on defense with his steals.

The game tape, statistics, and thousands of words written about him confirm all of this.

Millsap improved on his game every year in the league to the point where this little known prospect from a small school who was picked up by a team in the second round has now had a PER of 19.8 or higher in three straight seasons.

What did Paul work on this off-season? He contests that he does not specifically work on one thing each off-season, but the results speak for themselves. Paul Millsap is now a legit stretch four. And there is a mountain of evidence to support that claim.

Necessity is the Mother of Invention:

Right now the Utah Jazz are loaded with talent around the rim. Al Jefferson is having one of his strongest seasons ever, Derrick Favors continues to lay down the law on defense, Enes Kanter is a relentless worker around the offensive glass, and Jeremy Evans is still a highlight waiting to happen whenever he's in the game. Only Jefferson has the vestiges of a legit NBA face up game and an ever improving midrange jumper. Kanter's confidence in his shot is also increasing but he's still only 20 years old. Favors and Evans can make a jump shot, but the confidence level there isn't that high. Similarly, back when I was in peak health I could dunk. Just like the proverbial Favors/Evans jumper -- other people have seen it, it has worked in games before, but it was far from the most reliable weapon out there and let's not extrapolate capability to be akin to likelihood. Never once in all my years playing basketball did my coach call a time out and say "on this next play we need to get out of the way and let Amar go above the rim." Similarly, I don't think Tyrone Corbin (Mo Williams? I don't know who runs our time outs) is at that point where he says "let's work it around to Jeremy for the 20 footer!"

You can't have all the bigs in at once, and have them all play in the paint. Not in today's game. The Jazz needed a stretch big. Our front office did not go out and trade, draft, or sign one in free agency (unless you point to 6'9 Marvin Williams as one). It's a good thing that Paul Millsap was busy this off-season re-inventing himself INTO a stretch four then. Partly to make himself more valuable to a team, partly to make himself a more attractive free agent, and partly to just become an inherently better player, Millsap 'did it again.'

But that's the smallest point. The main point is that a guy who had for his entire career made only 18 threes (in 74 tries) has already made 12, and he hasn't even taken 30 attempts yet. He's way better at making threes this year. And it was a necessary step because the three point shot is a necessary shot now for PFs for floor spacing -- even if you aren't ONLY an outside shooter: Rasheed Wallace, Kevin Love, LaMarcus Aldridge, Channing Frye, Marcus Morris, Jeff Green, Lamar Odom, Ryan Anderson, Dirk Nowitzki, Chris Bosh (more of a SG anyway), and so on.

It was necessary for Millsap to be proficient from downtown, and he's killing it. But it doesn't stop there. He's taking more shots outside than inside compared to where he was in earlier incarnations of himself. And that makes him harder to guard, and capable of being put on the floor in a number of newer ways than before when he was a more limited offensive player. 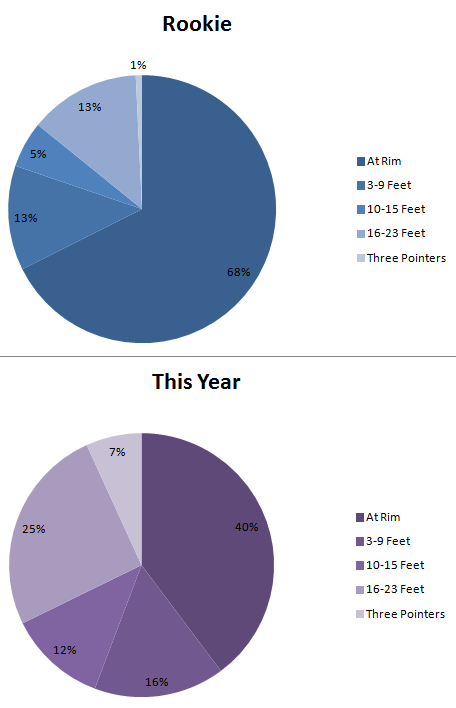 I could have charted his fg distribution by location for more data points than just his rookie season and this season, but it was a gradual progression. And it's never looked this diverse. Nearly half the pie is from traditional midrange (10-15 feet), extended midrange (16-23 feet), and beyond (23 feet and farther) -- 44%. You have to guard Millsap everywhere now because he can shoot and make it from almost everywhere, especially if you leave him open and give him time.

Becoming this face up, stretch four hasn't come at the detriment of his inside scoring ability either. In his first two seasons in the league Millsap scored at the rim at a 61.4 fg% and 58.6 fg% rate, and scored from 3-9 feet at a 36.0 fg% and 41.0 fg% rate. In his last two seasons? At the rim for 71.2 fg% and 68.6 fg%, and from close range at 44.6 fg%, and 38.2 fg%. Over all he's shooting better from inside now than he did before -- and he's actually shooting MORE total FGA from inside as well. As a rookie he shot the ball 3.87 times from these two ranges combined, last year he shot it 7.67 times inside, per game. He's just overall a more dangerous and reliable offensive weapon.

Needless to say he is.

The overt thing is that he's *only* scoring 14.8 ppg, his worst as a full-time starter. But there are good reasons for this, first and foremost, he's playing 30.3 mpg, which is ALSO his fewest as a full-time starter. And he's also shooting 47.5 fg% -- and that's the obvious consequence to no longer take 70% of your shots at the rim. He's diversified his offensive game, and while the dividends of such do not appear on the boxscore, they do during the game. And, ahem, he's still going to the free throw line 5.0 times a game -- a career high this year (while shooting less and playing less than any other year as a full-time starter).

His raw averages of 16 and 8 are right up there with the best years for Mehmet Okur -- who none of us complained about, when it came to production as a starter. Sap is also dishing out a career high 2.7 apg, and over 2 combined steals and blocks a game. If you bump up his production towards 36 mpg he's an 18 / 9 / 4 / 1.5 / 1 player who goes to the line 6 times a game and making threes all over the opponent.

So, overtly, he looks like he's having a down season -- but he's really not. You could actually argue that he's having no less than his second best season of his career, as he as the second highest PER ever (20.3), second highest Win Shares per 48 minute, highest AST%, and second lowest TOV% combined with his third highest USG% (off by .1 point from #2) . . . it really all adds up to a superb season.

And he's doing it WHILE being pushed for minutes by our young studs *and* while playing more and more face up offense. Can you imagine just how good he'd be if he was on a team that just let him be him?

Or is the innate concept of Millsap to be a creature that always improves and gets better?

If the last decade (college + NBA combined) is any indication . . . I think the answer is obvious.