It's the Halfway point for the Utah Jazz season -- and I'm going to go over something cool for each of our players, and right now it's time to get a little Randy.

Randy Foye is playing a lot -- and he's going to (for sure) go past the 2,000 total regular season minutes mark for just the second time of his career, in his 7th season in the NBA, pushing 30 years old. Now, I have my own feelings on this that I'll get into later -- but the point remains: you're not getting minutes unless you're doing something good out there (or are named Raja Bell or Josh Howard). And the non-secret out there in the NBA this year is that Randy Foye is shooting impossibly well right now. No, really. It's not just a saying. It's true. Beyond logic Foye is shooting better from three point land this year (43.7%) than he is overall, which includes things like layups and dunks (41.6%).

Essentially, Foye came over as a unidimensional specialist, and excelled at that specialization beyond that of his peers who are specialized in the same thing so much so that he has earned extra minutes. He's so good at threes this year that it's hard to keep him off the floor. Or at least, that's what our coaching staff believes. And frankly, the results on offense have been very eye opening.

In the off-season I went down memory lane and looked at every game Jeff Hornacek (former player, current assistant coach) played in a Utah Jazz uniform. I looked at how many minutes, shots, and three pointers he took in each of those games, and noticed that in the games where he had a proverbial 'green light' to shoot it -- he actually shot better than average. I guess for a shooter, where your on court production is most closely tied to confidence, having that comfort and worry-free shooting night can make the game feel more like a game, and less like a series of pressure situations. I looked at that same situation in relation to Randy Foye as well, and the results were quite similar, if not better.

For Horny I argued that it would have been good to have had more 'green light games' for Jeff in his time here, and how it might have made us a better team. We're getting precisely that this year with Randy Foye. This season Foye is shooting 9.1 shots a game, which is quite middle of the pack for him over his career; his career average is 10.0 shots a game. However, he is shooting a disproportionate amount of his shots from downtown. For his career he has averaged 3.7 three point attempts per game -- and this season he's shooting 5.2. He's taking more of his 'best shot' each game, while still reducing the number of shots he takes per game.

The result? Well, before you scroll down put on some oven mitts -- because the results are insanely hot.

Overtly when you look at what Randy has done in his career, on other teams like the Minnesota Timberwolves, Washington Wizards, and Los Angeles Clippers, and with our Jazz -- you would think that his season is pretty 'meh'. 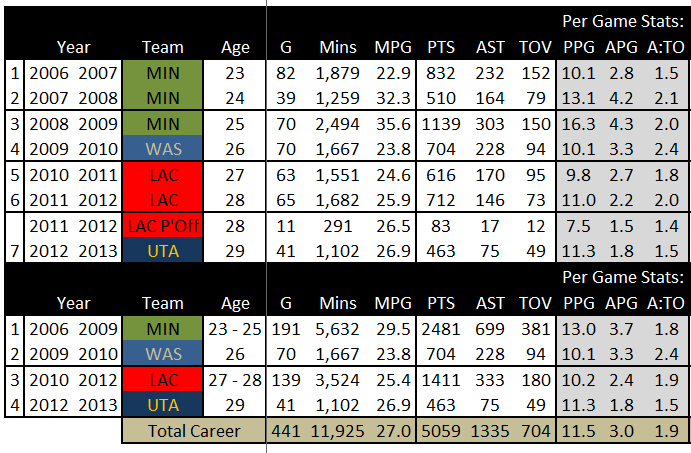 But when you look at the stuff that matters for his role (as the designated shooter), this season is his best season ever. He's never shot better than he's shooting right now in a Jazz uniform. And he's never shot more from deep, than ever. 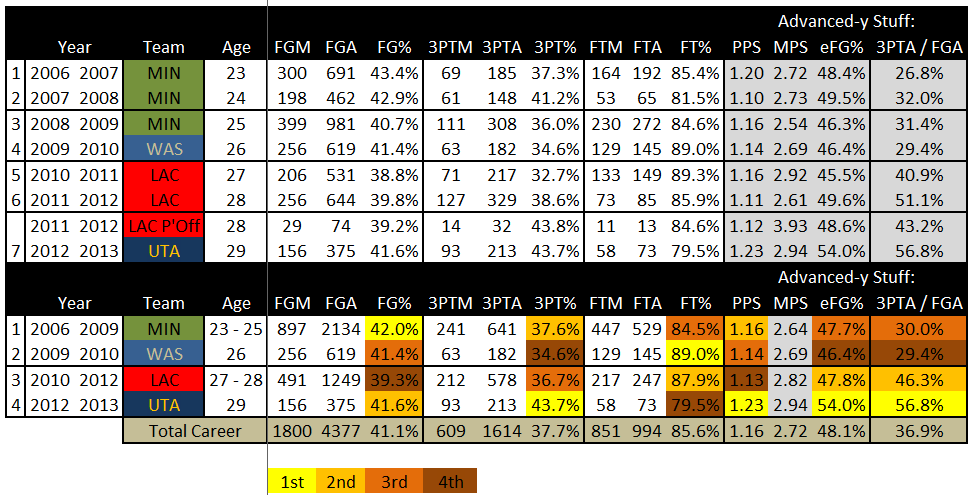 And almost every shot from downtown is going in. In a Jazz uniform he has thrived when it's come to shooting efficiently. His MPS, minutes per shot (or minutes he needs to play in order to accrue 1.0 FGA) is actually the largest in his career as well. This means that he's taking 1 shot about ever 3 minutes of play (2.94). The trend is that he's being smarter with his shot selection, and shooting less frequently. So while he's shooting 56.8% of the time from deep, and shooting better, he's also jacking it less. Point of reference, I think Morris Almonds MPS was much lower (smaller number = chucker). Yeah, I just looked it up, in Almond's first year here he shot the ball every 36 seconds he played. Foye's shooting it once every 176 seconds.

Of course, you know, if your frame of reference is Morris Almond you're setting the bar pretty low. Let's look at Foye against, well, Kyle Korver. Korver came off the bench and played the role of sharp shooter. In a Jazz uniform he played in 207 games (regular season and playoffs combined), and played 21.8 MPG. He averaged 6.6 shots a game, and of that, 3.2 of them were three pointers. His 3PTA / FGA ratio was 47.7%. So less than half of all of his shots were threes.

Randy has only played in 41 games for the Jazz, and he's playing 26.9 MPG. He is currently averaging 9.2 shots a game, and of that, 5.2 of them are from downtown. His 3PTA / FGA ratio is 56.8%. He's playing more minutes, he's taking more shots, and shooting a significant majority of them from three.

But Kyle a) became increasingly gun shy -- where Randy is not; and more importantly, b) Randy is on the team right now, and Kyle is not. So yes, Randy is inferior to one of the greatest pure shooters in the history of the sport -- but right now he's shooting better from three than Kyle did, while taking a significantly larger number of his shots from three.

Kyle was a shooting specialist, but Randy is a super-specialist at threes. And the numbers reflect that. Should Randy be playing MPG more akin to what Kyle did -- while becoming more dangerous from other parts of the floor? I don't know. Should he come off the bench to wreck other teams like Jamal Crawford does? I don't know. Should he keep shooting? The theory of the Jeff Hornacek Green Light Game clearly says "no". Randy is at his best when being an active part of the offense, keeping the defense occupied by his three point barrage.

Okay, aside from his three point shoot (which is absolutely demonstrably off the charts, he's super hot right now, and no one is doubting that part of his game) . . . Foye is pretty 'meh'. His AST% is 11.0%, a career low. (He came into the league as a point guard, remember) His PER is almost a career low, at 12.7. He gets to the line only 1.8 times a game, in nearly 27 mpg -- and he's shooting a career low from the FT line. He doesn't seem to set people up, but his role is changed. As a finisher he's doing okay as long as he has some daylight and his feet are set. Defensively he has been given the business from everyone from DeMar DeRozan to Danny Green. That's not the part of the game he excels at. He is great at one thing, and he's killing it at that one thing.

But usually NBA starters can do more than just one thing, though.