This off-season the Utah Jazz front office really went out there and got us some serious three point threats. No we did not trade for Kyle Korver and J.J. Redick . . . but we did a number of nice moves to trade for Mo Williams, Marvin Williams, and sign unrestricted free agent Randy Foye. The team also drafted NCAA scoring guard Kevin Murphy as well. The focus on getting all these three point makers came as a stark contrast to how the team did not do anything to address the defensive deficiencies for our team. As a result, going 'whole hog' for threes meant that it was the primary focus of the front office in the off-season, and more importantly, that the end result or desired result for putting all our off-season eggs in the three point basket should be that we'd never have to worry about threes again in the short term.

So the All-Star break has come and gone, and we have a n=50+ data set with which to evaluate our team with. So we can really dig into the three point issue. Beyond Mo, Marv, and Randy . . . our main three point threats this season have been Gordon Hayward, Jamaal Tinsley, Alec Burks, DeMarre Carroll, Paul Millsap, Earl Watson, and the rookie Murphy. Those 10 guys have taken the majority of our threes -- and outside of random events -- are really the only guys we need to talk about in the Utah Jazz three point attack. Ideally, no one else should ever take a three -- but that's not the case. So, for this group of 10 players, they have gone a collective 324/881 from downtown. That's 36.8%, which is not only higher than our total season mark of 36.3%, but a lot higher than last seasons' mark of 32.3%. So yes, our core three point shooters this season are getting it done.

But no, you're not getting off easy here! (Pulls you back to the hard wooden single school room bench by your ear)

Way back in the off-season I spent hours working on a post about our three point shooting, and also another about the different ranks or tiers of three point shooters. I'm not crazy enough to traverse our archives to find it right now. (Last time we went in with 10 men to find a post about defensive rebounding, only I and my native guide returned.) So there's no links there. The whole issue is that our shooting HAD to be better because that's the only thing we fixed; and if it was better, how much better was it? 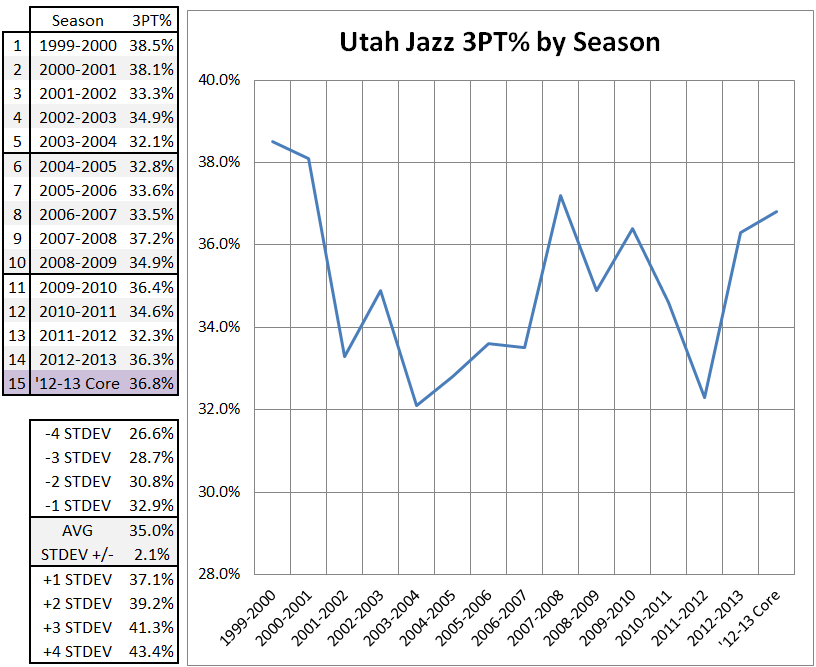 Well, that's sadly informative. I was living right now in the idea that we were living in the new golden age of Utah Jazz three point shooting. I guess that's true, we're just TAKING a lot of threes, and in comparison to LAST SEASON it looks great. Yes, our Core 10 guys from this year are performing better than our whole team this year. And yes, our team this year (2012-13) are performing much better than last season (2011-12) . . . but . . . that's really it. Propaganda aside, we're not even as good by this single metric (3pt%) as we were in the 2007-2008 Mehmet Okur / Deron Williams / Kyle Korver / Andrei Kirilenko days. And in terms of making the threes we took, again 3pt%, we're now (and during those D-Will days) both far behind where we were in the swan song of Stockton and Malone. That season Bryon Russell shot 39.6%, Howard Eisley shot 36.8%, Jeff Hornacek shot 47,8%, and John Stockton shot 35.5%. That ranking was based upon most 3PTA to least.

And while that's a sobering trip down memory lane, making the shots you take is one thing; but another thing is actually taking shots. The most 3PTA per game for that 1999-2000 group shot was B-Russ who shot 3.3 threes a game. Today Randy Foye takes 5.4 threes a game. We may not have accuracy now, but we have volume. (Oooh, symbolism for BOTH our team from outside, and also perhaps also the Utah Jazz state sponsored media like radio and internet channels! May not be accurate, but has volume. Oh Snap!)

So let's look at this team, this season: 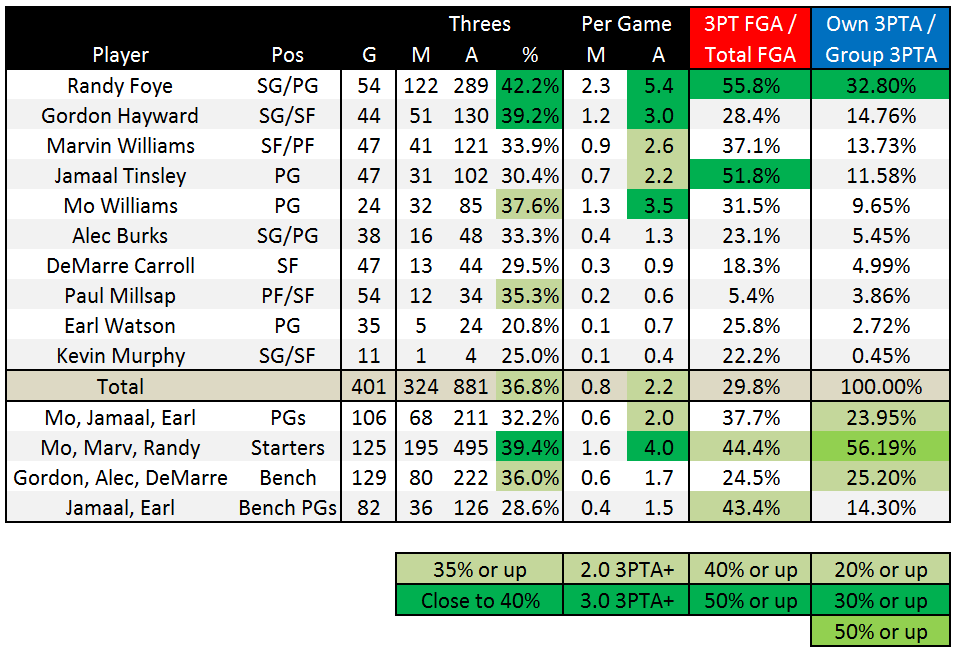 This table has a LOT of information.

First, we see each of our 10 guys, then the totals / averages for these 10 guys as a group. Then we also have them separated into sub-groups: all of our dedicated PGs (Mo, Jamaal, and Earl); our starters (Mo, Randy, Marvin); our bench (Gordon, Alec, DeMarre); and then our bench PGs (Jamaal and Earl). These sub-group breakdowns are important.

Okay, now let's go and talk about each player and/or group:

So what do we have? The guys we brought in to be good from outside have been good. Marvin dipped down back to his career average, Randy is having the best shooting year of his career. Mo is Mo. So over all they're doing it. But their true effect against the rest of the last 15 data sets shows that we're only slightly above average as a result.

The guys with the upside to improve are average, but slightly below average I feel. Gordon is doing it, and we love his confidence now. Burks and DeMarre have both improved; however, I don't think they'll ever be great.

If there is a problem it's with back up PG -- this should be the position to target this off-season if we don't blow up our bigman core. We need a back up PG who can hit threes. Not just because Jamaal and Earl are performing poorly from three; but because most good teams just basically have one who can hit threes. It's important.

So over all -- we put all our off-season eggs in the three point basket; and we are better than last season (32.3% -- which is OVER -1 STDEV worse than average, and thus, between -1 to -2 STDEV below). But not significantly so. And over all, our team's core are up or down, but the lion's share of it all comes from Randy Foye this year. We're super lucky to have him -- but his remarkable shooting may price him a little too high in free agency. Furthermore, Marvin's single year shooting could be a cautionary tale as he went from being a 39% dude to being a 33% dude this year, and fell back to his career average. How hot can Foye continue to be? He is going to be 44% for the rest of his career? I really don't know, and while he's shooting over 5 times a game, and maintaining his current average, statistics tell me that I should not expect this trend to last forever.

Ultimately, we're better than last year. And it's due to Randy Foye. Will he last? Will this method of getting better last? Those are the worries that will haunt us for the rest of this season, and the future. For now -- enjoy this golden era of Utah Jazz three point basketball.