Los Angeles Lakers Kobe Bryant vs. The Utah Jazz: A history of scoring

If you like shots this is the place for them

Share All sharing options for: Los Angeles Lakers Kobe Bryant vs. The Utah Jazz: A history of scoring

There's one last game for the Utah Jazz this season, it will be against the Los Angeles Lakers -- in what looks like the last game in the storied career of future Hall of Famer, guard Kobe Bryant. It's a road game, which is never good for the Jazz. But it's also going to be an emotional game as well for all involved. None more so than Kobe. Well, probably a complete heartbreak for some of the 12 year olds in the $800 "cheap seats" tonight. But whatever. It's Kobe's day. And against the Jazz, it's mostly been Kobe's way.

Earlier this season we went over how he has scored against the Jazz, but we needed to look into it again. This isn't a redundant re-hash of past research, this is a new look at more stats in a different way. You should still click on that link if you like graphs and stuff. Kobe has scored a lot against Utah. This is the frequency of hitting certain points thresholds against our guys: 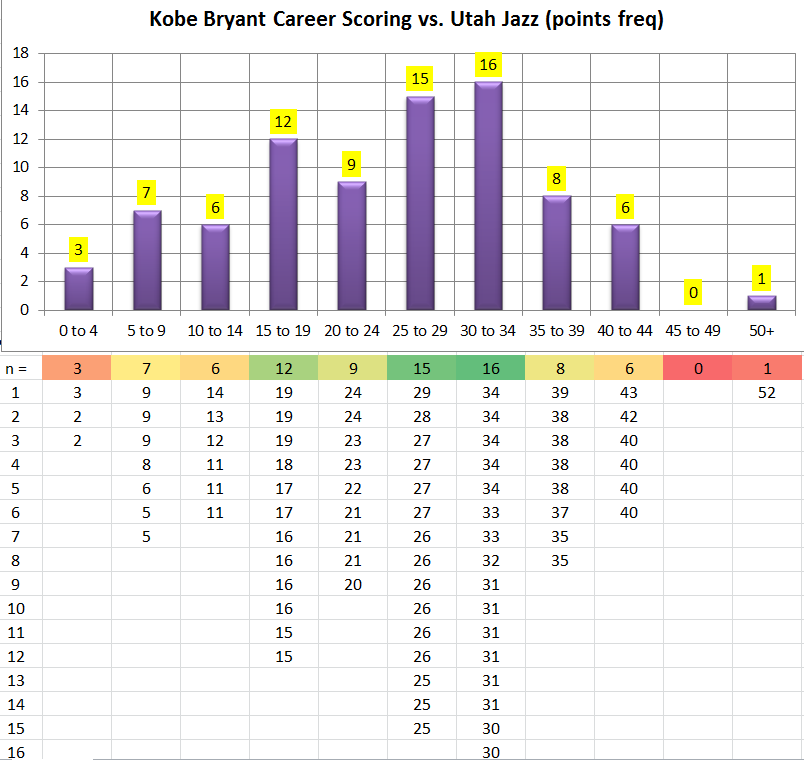 That's what 83 games of work looks like. It's also almost a standard distribution. It's more likely than not that, on the whole career, he'll drop 25 or more on the good guys. But how many will he score tonight? Well, over the last 10 games against the Jazz he has averaged 21.4 ppg -- lower than his career average. In those 10 games the Jazz have won 7 times (whoopee!), while Bean has shot 36 FG%, but still accrued a PPS of 1.24 due to his excellence at the line and frequency of getting there.

I'd have to say that he's had some good shooting nights, but he's been somewhat carried by getting to the line a lot.That said, he has only 4 FTA in the last three games. That is not going to be the case tonight methinks. Not at all. It will be his farewell game, and it is at home. So let's look at the last 10 HOMEGAMES for Kobe against the Jazz.

Kobe is the old cowboy who is going to go down shooting, especially in this home invasion situation where he's hunkered in and knows he's not leaving with any shots not taken.

If there is a saving grace it's Kobe's recent performance against the Jazz from deep. He has shot just 5 for 26 from outside over the last few games, and gone 0 for 7 in his last two performances. So, this is me jinxing our team here tonight. Sorry for that, Jazzfans.

He's going to be matched up against Gordon Hayward, Rodney Hood, Alec Burks, Joe Ingles, and possibly Shelvin Mack, Chris Johnson, and Trey Burke if things go really haywire. Is Kobe likely to want to avenge going for just 5 points against the Jazz in the last two outings in a row? How will the Jazz defenders fare, knowing that they just have to key in on this game; after all, the Jazz are fighting for their playoff lives right now still.

No matter what happens I will be happy that Kobe retires. You know, only about 3,345 points behind Karl Malone for 2nd place in all-time scoring. The only thing that is yet to be decided is how the shooter finishes his career.

This was the obvious joke to make, but what do YOU think he will do tonight? How many points does the Mamba finish with?