NBA Podcast: Utah Jazz youth brigade is a reason to smile as a fan

Phil Naessens has Amar on the line, and they talk about the Jazz, development, the F5, and what to be happy about.

Share All sharing options for: NBA Podcast: Utah Jazz youth brigade is a reason to smile as a fan

Phil had me on the show again to talk about the Utah Jazz (we talk more frequently about the general NBA -- but more on that SOON!), and obviously, we had to talk about Trey Burke, Alec Burks, Gordon Hayward, Enes Kanter, and Derrick Favors. You can listen to our talk here, or just click below.

While you are waiting, let's check up on the F5 guys and see how much they have played.

Burks was injured for four games, but since we last checked in on this, they've been healthy for eight games, and played on the court together for six of them. For the record, they've now played together in 18 of a total possible 45 games this season. And they've played for a grand total of 4,085 seconds -- or 68.08 minutes this year. That's also a robust 3.78 minutes per game. If you want to be mean, then it's 1.51 minutes per game possible. But let's not be mean. 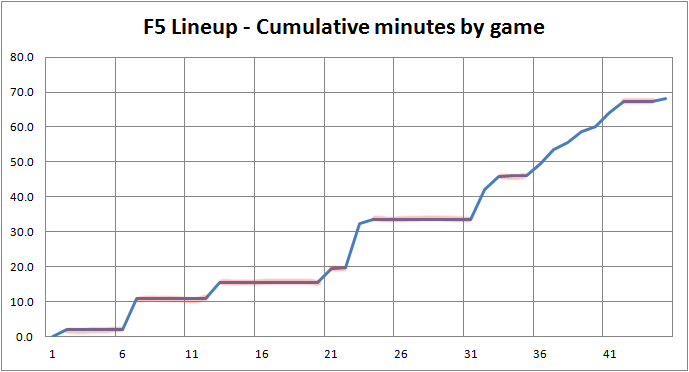 Yeah, the pink shows how many times this lineup, when healthy and all available, has flat lined over the season. There was a really good jump of normal (slope = 1) growth between the 35th and 40th game, but they flat lined again shortly after.

So how do these guys stand up to what the Oklahoma City Thunder did with Kevin Durant, Jeff Green, Russell Westbrook, James Harden, and Serge Ibaka? Well, for the fun of it, let's all Nick Collison in the mix, along with Marvin Williams.

It remains to be seen if Marv will be back next year so we can see some non-rookie year values for Trey Burke. But what we see is that while Collison was a vet at this point, the Thunder still played the younger guys more and more together. And the other thing is that the Jazz have only played their dudes 68 total minutes so far. Sure, 68 in 18 games isn't bad, but it's really 68 minutes in 45 totally healthy games.

For the Jazz we see something different than what the Thunder have done. But we are constantly told that the Jazz always do things the right way, and we shouldn't criticize them. Well, in that 2010-2011 season the Thunder won a lot of games, and they did it with playing their five young guys on the court together for nearly double what we're playing our young guys right now, in a risk free season.

Anyway, hope you enjoyed the podcast, and recognize that even if the young guys aren't playing a lot -- they are fun to watch, they like to play with one another, and in the future they should give us lots of reasons to cheer!