No really, you're going to read a lot about Dante Exum this year, for good reasons.

Dante Exum was a mystery, but before long we're going to be super saturated with information on the kid. From what Utah Jazz fans have seen so far, from his commercials, interviews, and play on the court, we love him. The Jazz franchise seem to as well, as they did not hesitate to pick him #5 in the 2014 NBA Draft. ESPN's panel seems to have some love for him as well, as they recently gave him enough votes to be their 4th place player in the Rookie of the Year race. That's not bad for a kid that few people knew much about. 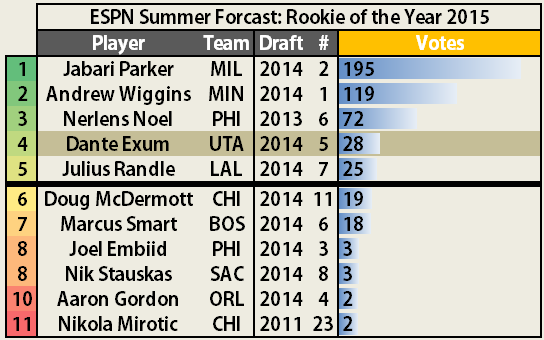 Check out the full "breakdown" from ESPN here.

I don't think that many people would argue about Jabari Parker or Andrew Wiggins taking the lion's share of the votes. Nerlens Noel is ready to make a big impact on a bad team as well. Exum is a distant fourth, but it's not a bad place to start.

If you remove the last T from that word you get star. And that's pretty much how Dante has been playing this summer. In the summer league he showed everyone his potential to be a celestial object. His first points were on a back door cut alley-oop in the half court, he made threes, passed extremely well, and even had game winning steals. While he didn't shoot too well, we all can see how he was picked Top 5.

His summer didn't end there, right now he's playing in warm up games with his national team, Australia, en route towards the FIBA World Cup 2014. The games are hard to find if you're not in front of a computer all day long. And he didn't dominate against a team that is from a basketball pipeline that they almost beat the Dream Team back in 1992. (Lithuania's basketball legacy is much larger than Australia's) But if you add up his performances together you get to see that he's doing pretty okay.

What the average stats don't tell is his ability to adjust his game against how he's playing within it -- that's a self assessment ability not a lot of younger players have. He couldn't buy a bucket against Lithuania, so he instead got to the line 8 times, making 7 of them. Against Finland he needed to take more threes, and he went 2/3 from outside there. And vs the Ukraine he dominated them, and because of his aggressive play on offense and defense he was able to elicit extra defensive pressure and was then able to find his guys for easy scores.

We're going to see more of him in 16 days when the World Cup starts. But for those of you who haven't seen enough of him yet, enjoy these vids:

Awesome. We love Dante. This season is going to be great!